Silver and Gold are
Moving on Up 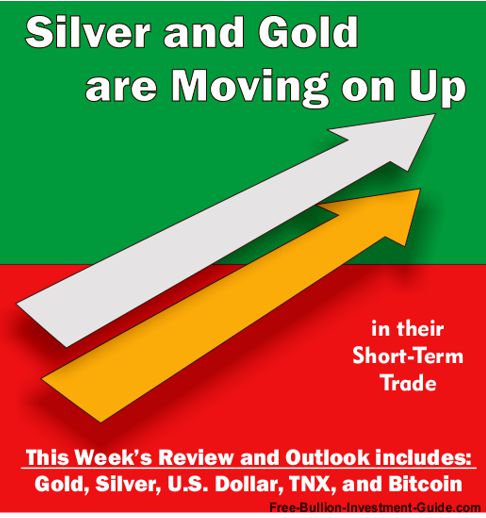 Each asset below has three sections.

1)  In the 'review' section, a copy of the previous outlook for that asset is posted.

2) Next, you'll find a 'review - continued' section where there is a brief review of how accurate the previous outlook was.

3) Finally, you will find an 'outlook for the week ahead' for each of the assets below.

In the week to come, silver should continue to turn up in price, both of its lower indicators (RSI & MACD) are agreeing that this should happen.

In addition, although we may see the price rise this week, technically we'll also probably see the price of silver consolidate around the $16.95 to $17.15 level.

However, fundamentally, tensions with North Korea are back on the rise, so the price of silver (and gold) may break through its resistant levels in the week to come. 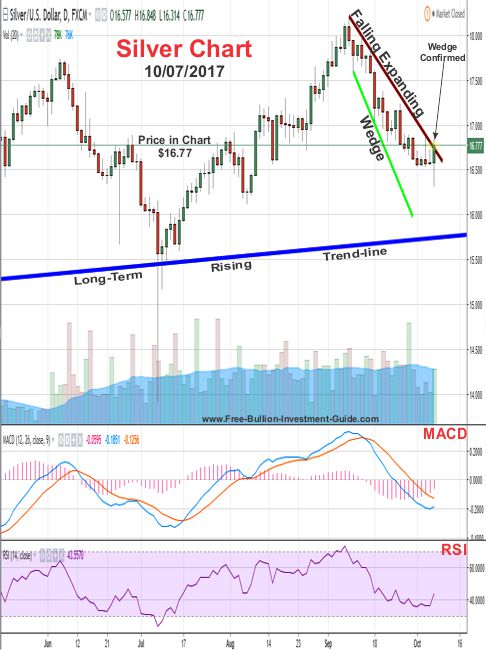 The price of silver did continue to rise last week.

In the chart below, I've highlighted the area that I stated that the price may slow and consolidate.  Silver's price did consolidate but not by much, it basically continued to move up.

In addition, as mentioned last week, the tensions between North Korea and the United States remain elevated which continues to help the precious metals rise.

For the week to come, I didn't point out any new patterns in the chart below because no clear trend-lines have been identified except the bottom long-term trend-line that dates back to December 2015.

However, in the chart below, you'll also notice a un-named 'green' trend-line.

This trend-line could be the 'Neck-line' of a possible 'Inverse Head and Shoulders' pattern or it could simply be a resistance line, more time needs to pass before it can be determined how this trend-line can be identified.

However, ultimately for the week to come, silver's MACD and RSI are showing that its price has more room up to move, plus, last week's consolidation area will become a support level for the price of silver. 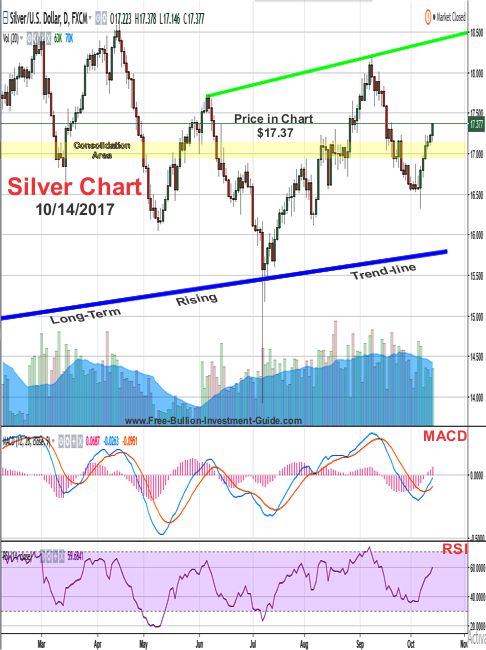 For the week to come, like silver, gold's MACD and RSI are both indicating that the price of gold should start to turn up at the beginning of next week.

As gold rises it will most likely start hit resistance between $1290 - $1310, so we should see some consolidation at this level.

Unless the tensions between the United States and North Korea escalates again, or some other unforeseen act happens then we may see the safe haven continually rise throughout the week.  Time will tell. 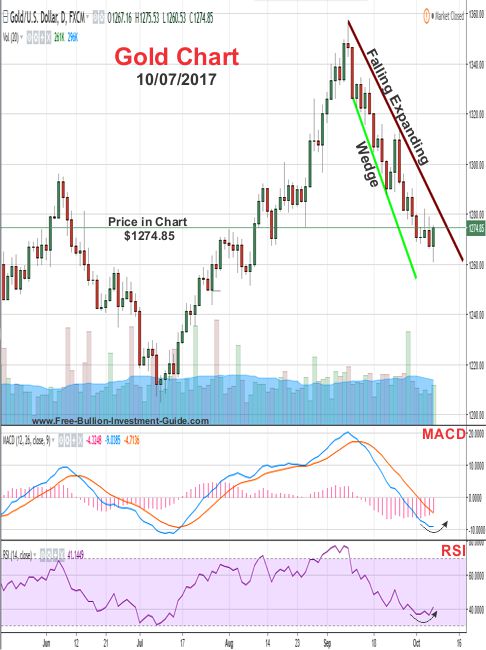 In the chart below, you can see that last week gold 'confirmed' the 'Falling Expanding Wedge' pattern.

However, it is still trading inside the consolidation area (zone) that I mentioned in last week's post.

In the chart below, for the week to come, like silver, no clear patterns have formed.

But, Gold's MACD and RSI are indicating that gold's price has more room to rise this week, some consolidation along the way is always expected.

Lastly, like silver, I've put in the chart below a un-named 'green' trend-line, and like silver, this could either be the Neck-Line of an 'Inverse Head and Shoulders' pattern or it could simply be a resistance trend-line.

However, it's too soon to tell, I've been seeing the 'Inverse H&S' pattern in the charts for over a month now and I thought I'd finally make you aware of it if you haven't already been watching it yourself.

If the pattern pans out, its outcome will be a very positive intermediate trade pattern for both gold and silver, but its way too early to say which way it will go; I'll keep you updated on it as time goes by. 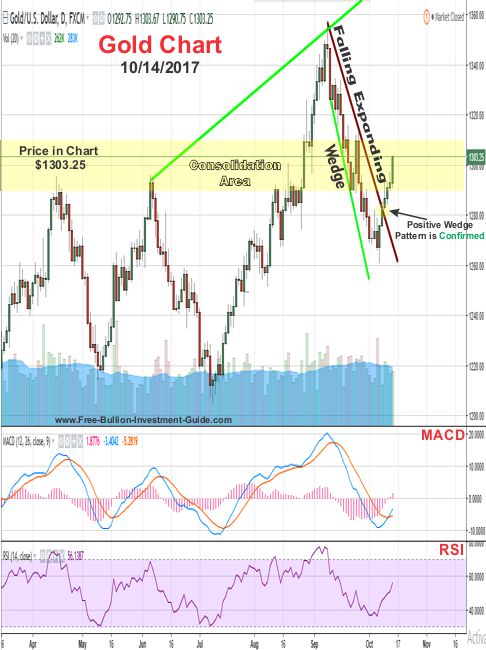 For the week to come, nothing new has shown up on the chart.

The negative 'Rising Expanding Wedge' is still looming over the dollar so sometime this week we should see the price of the dollar start to retreat. 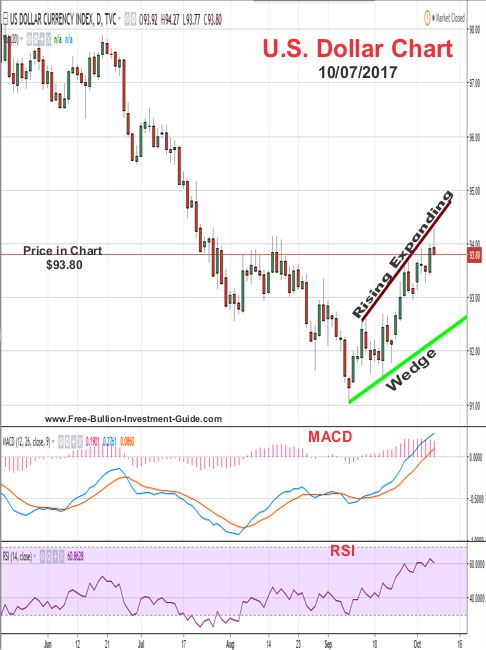 In the chart below, the U.S. dollar continued to retreat in price, but it still has not confirmed the negative 'Rising Expanding Wedge' looming over it.

For the week to come, the U.S. Dollar's MACD and RSI are both indicating that the price has more room to fall.

So it looks like this week we should see the negative pattern confirmed, time will tell. 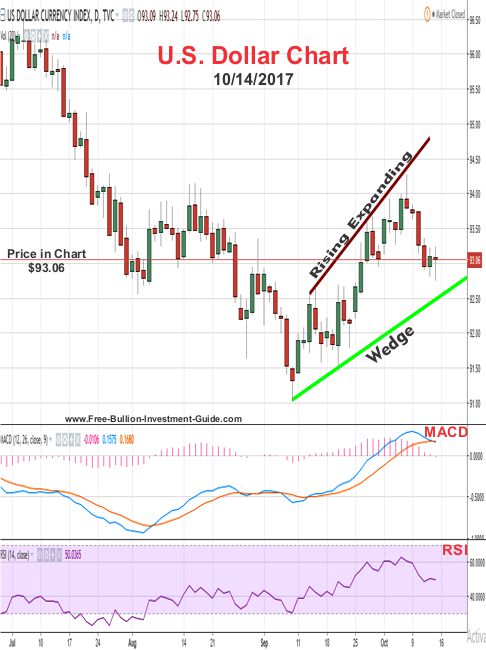 Two weeks ago, I did a review of the TNX and below is the commentary and chart from that blog post.

The TNX, Ten-year Treasury note, is a chart that I often watch to get an idea of what gold will do because the TNX almost always moves in the opposite direction of gold, you can see this in the TNX chart below.

You can also see, in the chart below, that the Ten-year treasury note has formed a negative 'Rising Wedge' pattern.

Time will tell when the pattern is confirmed, I'll update you when it does. 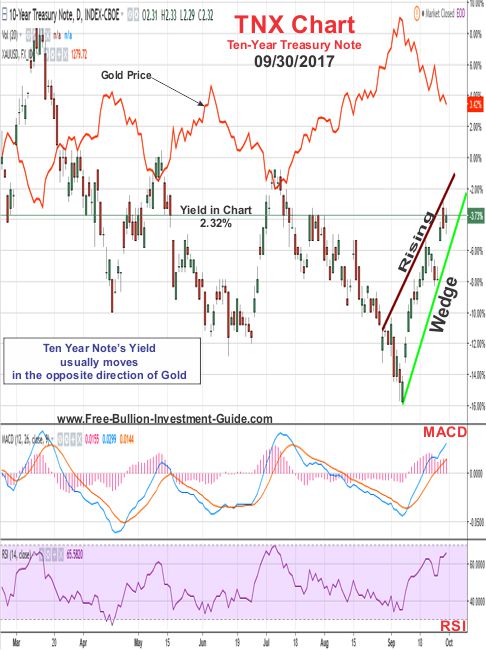 I will revisit the TNX chart again in the future, but no patterns have been identified at this time, although its MACD shows that more downside will most likely happen this week. 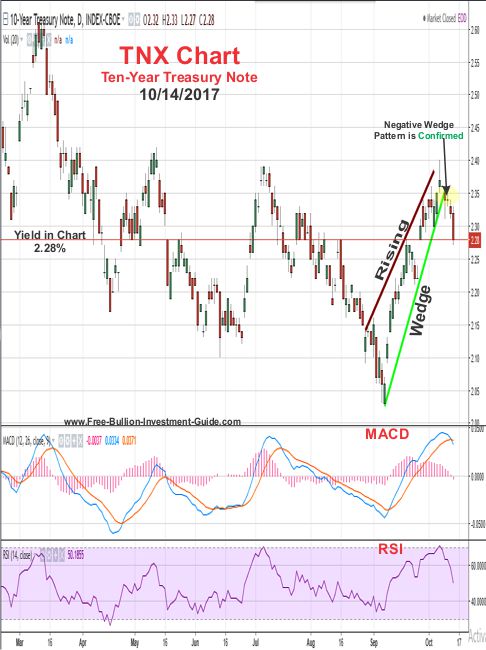 Below is last week's Bitcoin outlook.

In the Bitcoin chart, a negative 'Rising Wedge' pattern has formed.

Its hard to say when the pattern will play itself out, but I'll update you when it does. 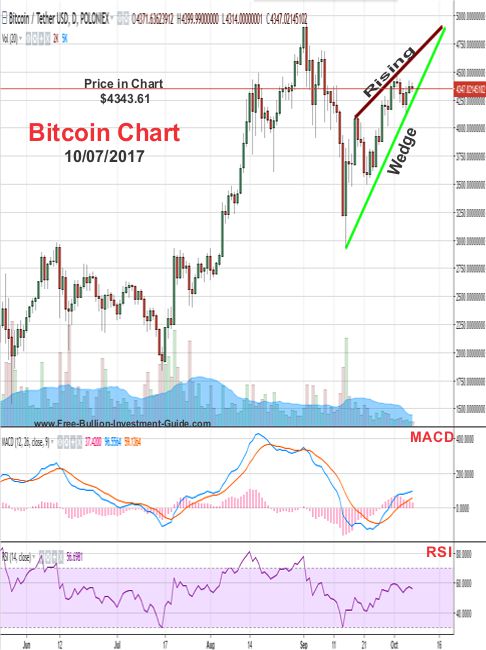 In the chart below, you can see that no less than a few hours after I posted last week's blog post, Bitcoin denied the 'Rising Wedge' pattern.

Last week, below the Bitcoin chart, I posted the following:

Full disclosure: I own some crypto-currencies, but I do not currently own bitcoin.

That statement is still true, what is also true is that Bitcoin is very volatile, and I rarely view its 'daily' chart to follow Bitcoin or any other crypto-currency's price.

For crypto-currencies, I usually look at smaller interval charts, 4-hr. to 5-min. charts, however on this blog I only use 'daily' charts, so for that reason, I doubt I'll be revisiting Bitcoin anytime in the near future. 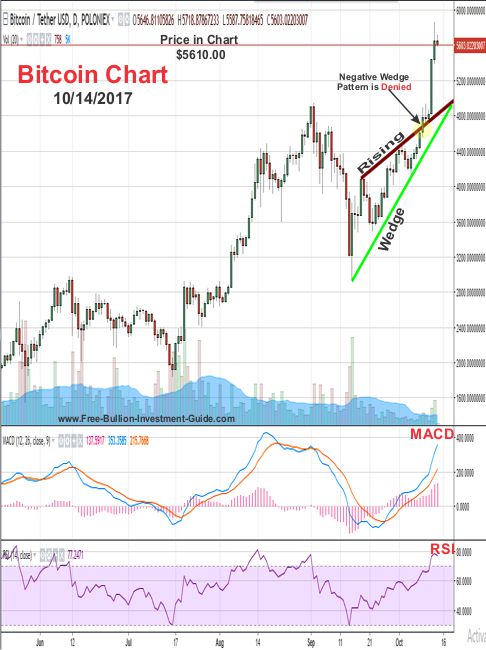