The Dow to Gold ratio is an market indicator that helps investors to decide where to put their money and when to do it. 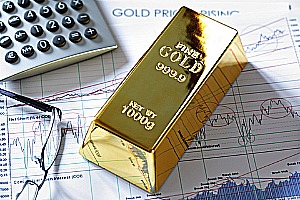 Investors of both gold and Dow assets can use it to determine the direction of either market.

This ratio has been used by investors across the spectrum for over 100 years, and for good reason, gold's been a reliable form of money for over 5,000 years, and the Dow has been around since the late 1800's.

The Dow to Gold ratio helps investors to decide where they should put their money by indicating where to invest in what they think is as good as Gold.


The History of the
Dow Jones Industrial Average (DJIA) 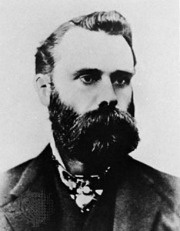 The business opened in Lower Manhattan, in the basement of a Candy Store, which is now the location of the New York Stock Exchange.

The Customer's Afternoon Letter was a daily journal for investors, in that Charles Dow published the Dow Jones Averages, which contained 9 railroads and 2 industrial companies.

The first Dow Jones Average was later renamed the Dow Jones Transportation Average (DJTA), to date, it is the oldest stock index, still in use.

In 1896, Charles Dow split the Dow Jones Averages into two different
Averages, the DJTA and the DJIA.  The new Dow Jones Industrial Average (DJIA) was a broader indicator of the stock market than the DJTA.

The first Dow Jones Industrial Average was based upon 12 stocks it had the initial value of 40.74, currently, the average consists of 30 stocks and averages above 20,000.

How is the
Dow Jones Industrial Average
Calculated?


The Dow Jones Industrial Average is calculated by totaling the price of each of the 30 stocks listed on the DJIA, then by dividing the sum total price by the "Dow Divisor".

The Dow Divisor is updated every time a stock in the average splits or if a stock is taken out or added to the DJIA.

The Dow Divisor was published daily by The Wall Street Journal for free, it isn't any longer, you can learn more about the Dow Divisor here.

How to Read
the Dow to Gold Ratio


As shown in the chart below, the Dow to Gold Ratio shows that it is at or around 20.

Meaning it would take 20 ounces of Gold to buy one share of the Dow. 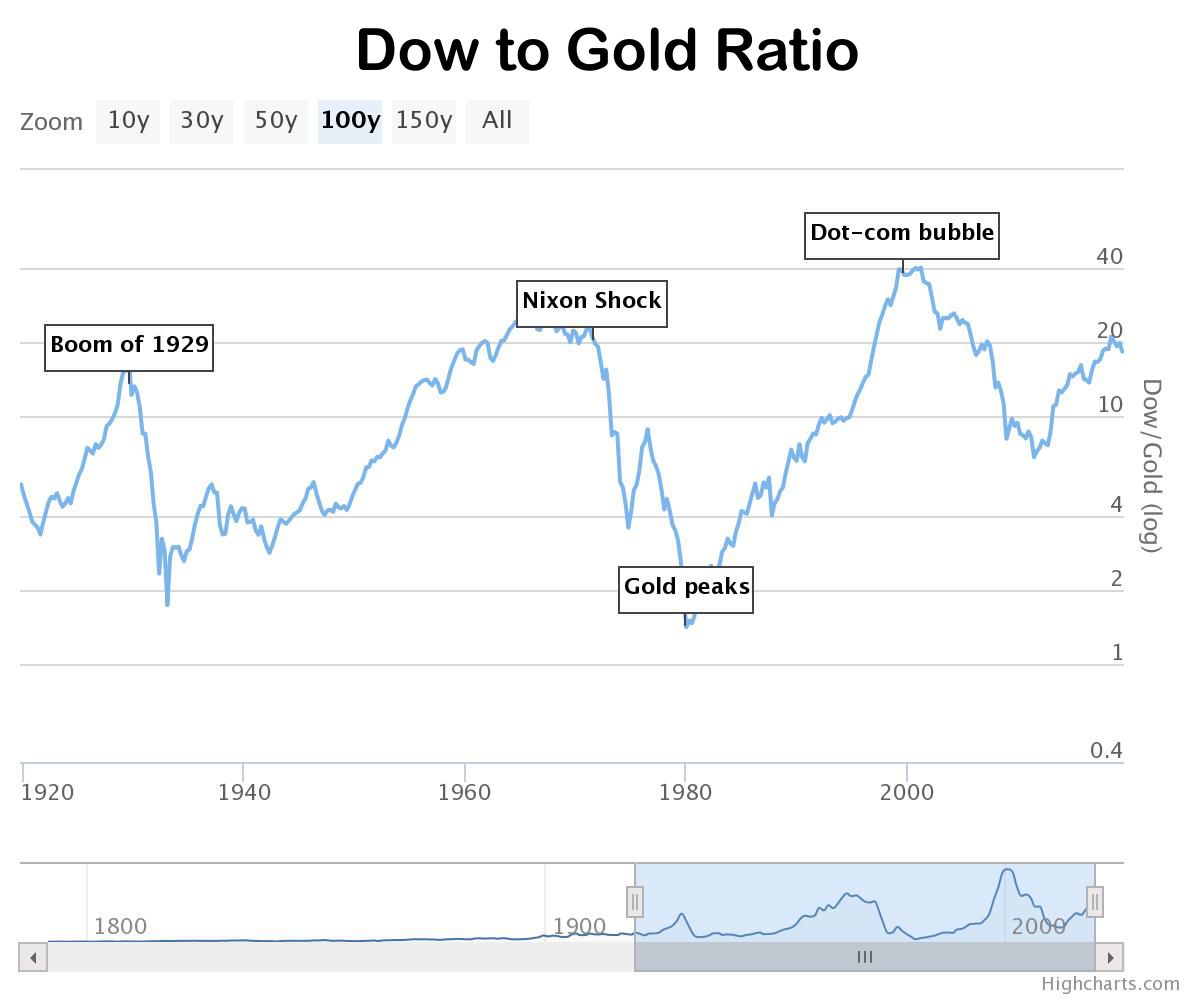 chart provided to us courtesy of Longtermtrends.com

As you can see in the chart above, the peaks in the ratio were when an investor should have gotten out of stocks and bought gold and other safe-haven assets.

Whereas, when the ratio bottoms, as gold is peaks, it indicates that riskier assets, like stocks, are becoming more attractive to investors, and will become more in demand.


The red shaded area in the chart below is the Dow to Gold Ratio.

The Dow to Gold ratio is the amount of Gold Ounces it takes to buy one share of the Dow Jones Industrial Average. 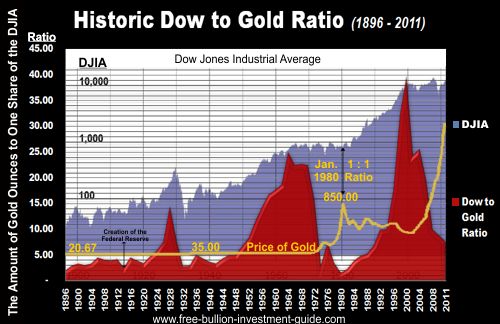 
Trying to Know
the Unknown

Since the Dow's inception in 1896, the markets have witnessed three
peaks and valleys in the Dow to Gold Ratio.

Each peak and valley have been an example of over exuberance in the markets, only to be squashed by reality.

In just about every bull market some investors have mentioned "The Good Times are Never Going to End,"  but eventually they do. 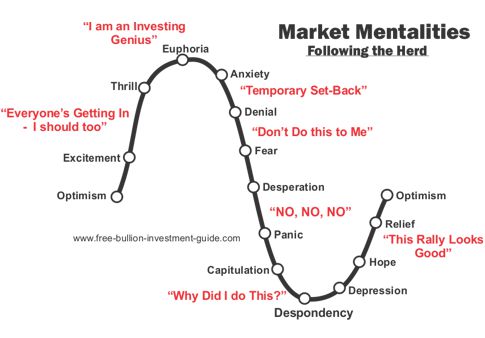 Chasing parabolic markets is like trying to catch flames, you're bound to get burned.

Judging when a the Dow to Gold ratio will peak or bottom is virtually impossible.

The best way to know what is going on in the market is to do your own homework by reading and listening to many sources as you can.

The Dow to Gold Ratio is a good investment tool that can help you recognize when the markets are getting too good to be true for either asset.

"A philosopher once said that the most important knowledge is
knowledge of one’s own ignorance."  - Thomas Sowell


Why Investors Diversify
in Gold?


As mentioned above, Charles Dow created the DJIA to give investors a
broad indicator of how the industrial markets are moving.

Like the Dow, gold is a good indicator of how the money in the markets is being managed.

Most investors have heard that they should have at least 10 to 20% of their portfolio in gold or silver to have a well-balanced portfolio.

Gold is Insurance, a Safe Haven that protects the value of your savings or investments.

In the chart below, investors who invested in just stocks over the last decade did not do as well as the investor who had a diversified portfolio with Gold. 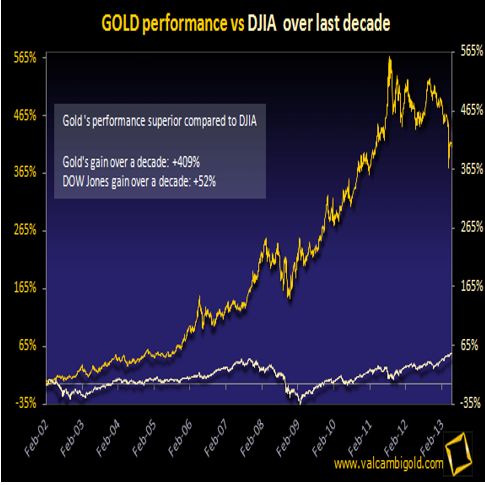 The updated chart below shows you not much has changed since 2013, when the chart above was produced.


In the next two charts below are from this guide's 'Price Inflation' page.

The charts show that Gold's future price looks very bright when compared to the rate of inflation and the purchasing power of your money.

The first chart, below, is a chart of the 'Average Median Income' in the United States. 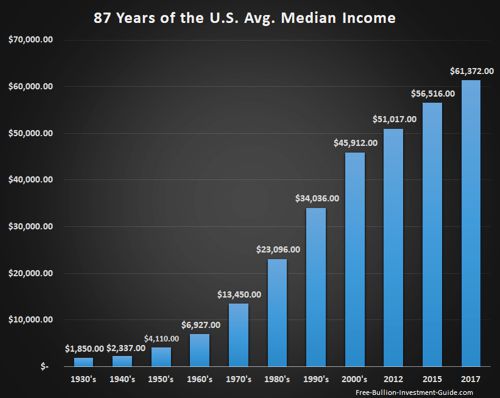 As you can see, the Median income is on the rise, but the dollars in your bank account aren't worth more, they are becoming more and more worthless.

Whereas, gold and other precious metals are the one asset class that can protect you the most in an inflationary market environment. 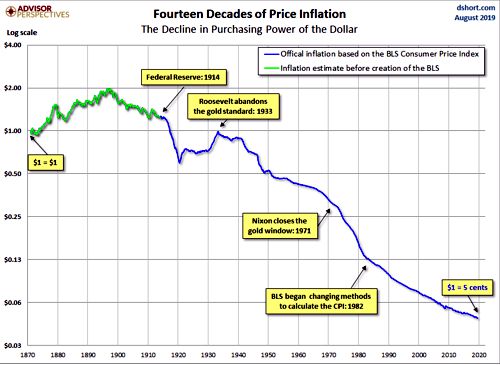 In closing, the Dow to gold ratio is a very useful investment tool for the stock or precious metals asset investor.

Whether you are new to precious metals investing or not, this investment tool is one that should not be overlooked.

It can definitely help you in timing the market, and help you decide
when and where you want to put your investment money.

Transfer from the Dow to Gold Ratio page