Bretton Woods is the name of a resort town in New Hampshire, where the International Monetary Conference was held in July of 1944. 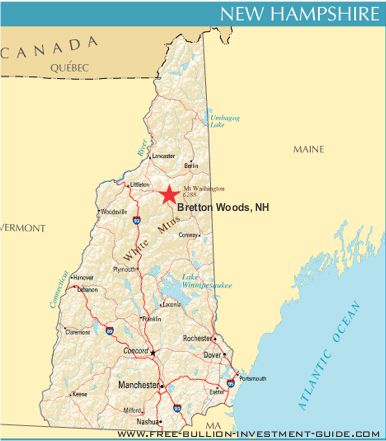 The conference consisted of 730 delegates from all 44 WWII Allied nations for the United Nations Monetary and Financial Conference.

The delegates deliberated during July 1st thru the 22nd in 1944 and signed the Agreement on its final day.

The planners hoped to avoid a repeat of the debacle of the 1930s, when the United States, as a creditor nation, insisted on the repayment of allied war debts from World War I.

Combined with the threat of isolationism, this led to a breakdown of the international financial system and a worldwide economic depression.

Governments of the 1930s used currency devaluation policies to increase the competitiveness of a country's exported goods.

They did this to reduce their growing deficits, instead it worsened other nations monetary systems. This caused plummeting national incomes, shrinking demand, mass unemployment, and an overall decline in world trade. 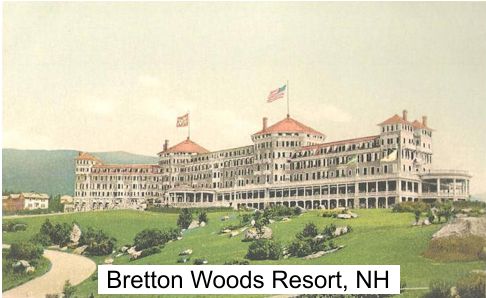 The Bretton Woods system of monetary management established the rules for commercial and financial relations among the world's major industrial states after World War II.

The system was the first example of a fully negotiated monetary order intended to govern monetary relations among independent nations.

Those attending the conference set up a system of rules, institutions, and procedures to regulate the international monetary system, establishing the International Monetary Fund (IMF) and the World Bank.

After ratification in 1945, these organizations became operational.

The chief features of the system were an obligation for each country to adopt a monetary policy that maintained the exchange rate by tying its currency to the U.S. dollar's value to the price of gold.

The IMF was established to bridge temporary imbalances of payments.

By the early 1960s, the value of the U.S. dollar against gold and under the system of fixed exchange rates was seen as overvalued.

In the 60's, there was a sizable increase in U.S. domestic spending from the Vietnam War and President Lyndon B. Johnson's "Great Society's" programs of Medicare, Medicaid and the "War on Poverty."

These policies gradually decreased the value of the U.S. Dollar against gold, causing currency markets to become greatly unbalanced. 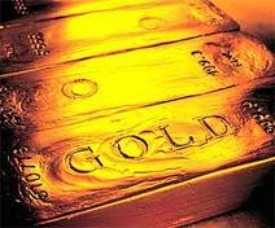 The End of the Bretton Woods System

On August 15, 1971, President Nixon unilaterally announced a temporary suspension on the convertibility of the dollar to gold.

An attempt to revive the fixed exchange rates failed, and by March 1973 the major currencies began to float against each other.

As a result, the Bretton Woods system officially ended and the dollar became a 'fiat currency,' backed by nothing but the guarantee of the government of the United States.

The 1971 event is known as the "Nixon shock" and the official end of the gold standard, which made the United States dollar the reserve currency for the member states.

Since the collapse of the "Gold Standard", IMF members have been free to choose any form of exchange arrangement they wish except when governments peg their currency to gold.

Here is a article from the Bullion Vault that discusses The Bretton Woods Gold Standard System.
BullionVault - How Did Bretton Woods Work?

In this last article, James Rickards discusses the Bretton Woods Agreement before and after it was created.

Daily Reckoning - The Dollar Will Die with a Whimper, Not a Bang
- by James Rickards