Since the early 80's, the name "Engelhard" has been synonymous with quality silver, gold, and platinum bullion.


The History of
Engelhard Industries 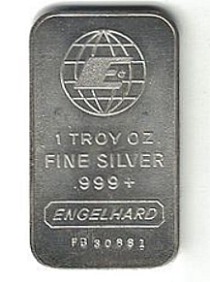 The founder of the Engelhard Industries was Charles Engelhard, Sr., who immigrated from Germany to the United States, in 1881.

He arrived in the United States as a foreign sales agent, from his employer, a platinum marketer.

Engelhard saw opportunity in the United States and decided to stay in the country.

Charles Engelhard, Sr., combined these companies into a Precious Metals Enterprise, under the name Engelhard Industries, its headquarters was located in Newark, New Jersey. 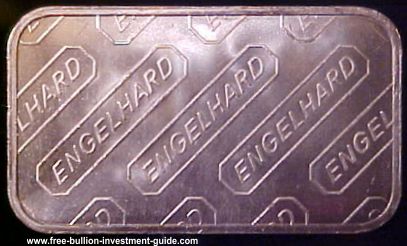 The company was a producer of silver and silver alloys in mill forms and it was the operator of the world's largest precious metals smelter.

After taking over the company, Engelhard Jr. expanded operations to South Africa, South America and Europe and built Engelhard Industries into one of the world's leading refiners of precious metals.

Ian Fleming, the creator of the James Bond Series, and a friend of Engelhard, used Charles Engelhard Jr. as his inspiration for the character 'Auric Goldfinger,' in the novel and film; Goldfinger.

By comparing these pictures, with the video below, you can see the resemblance of Auric Goldfinger and Charles Engelhard Jr.

Charles Engelhard, Jr. died on March 2nd, 1971.  Sadly, he did not live to see some of his company's biggest and most profitable innovations, concerning platinum group metals (PGMs). 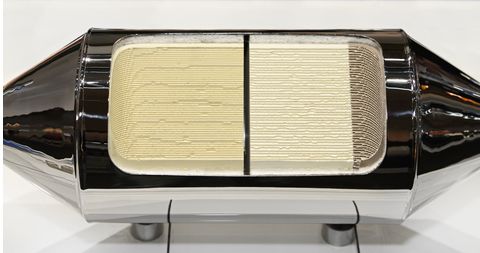 The converter's design used a honeycomb of platinum group metals that changed exhaust gases from an internal combustion engine into less toxic substances.

The Engelhard Corporation is now owned by BASF Chemical Company.

On May 30, 2006, Engelhard Industries was taken over by BASF Chemical Company after the board agreed.


BASF paid $US39 per share, for the company.  The transaction totaled $5 billion.

BASF SE is the largest chemical company in the world and is headquartered in Ludwigshafen, Germany. 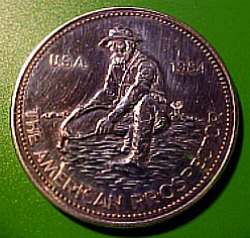 The Engelhard 1oz. silver rounds were the first bullion rounds minted and marketed to the public.

The company started "The American Prospector" gold and silver bullion rounds in the 1970's and continued to mint them, until 1988.

The gold rounds are much harder to find, they were produced in the following sizes: 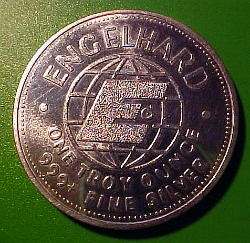 "The American Prospector" silver rounds were produced in the following sizes:

Just like the gold rounds, the fractional sized silver rounds were produced in smaller amounts and are much harder to find.

Plus, the smaller silver bullion rounds have higher premiums, due to the rarity of the round.

The 1oz. silver rounds can usually be found nearest to the spot price.

Unfortunately, the company (now BASF), no longer produces bullion for the public, although you can still find them on the secondary market, through different bullion dealers and auction sites.

Even though the company no longer produces bullion for investment
purposes, they do still deal in the precious metals industry concerning
the platinum group of metals (PGMs). 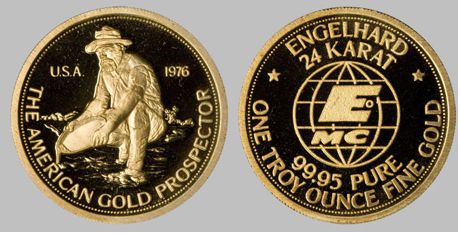 Where you can
Buy
Engelhard Bullion


In the mid-70's, when inflation was rearing its ugly head, Engelhard realized that there was a strong consumer demand for precious metals bullion.

Engelhard made gold, silver, platinum & palladium bullion bars during
this time.  It wasn't until the early 1980's, that the company started to
produce bullion rounds.

Even though the company's expertise was in the Platinum Group Metals (PMGs), Engelhard is best known among bullion investors for their silver bullion.

Most Engelhard bullion bars are marked with a serial number (but not
all), in addition, most Engelhard bars display its Name or a large "E" along with the bar's weight and purity.


Minted Bullion Bars - are cut from a cast bar that has been rolled to a uniform thickness. The cutting is done with a die to create blanks that have a specified dimension and weight. All the surfaces are smooth and even. Markings are usually stamped on the bar using a minting press.  In addition, company markings on minted bars will be "raised" due to this process. (Minted bullion photo provided by the courtesy of Heraeus) 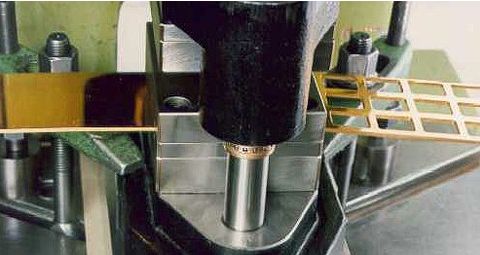 Casting or Poured Bullion Bars - are produced by pouring molten precious metal directly into a mold.  Markings are usually stamped on the bar using a hammer or a press.  In addition, company markings on cast bars will look depressed or "sunken," into the bar.

See the 10oz. Silver bars section below, to see how the company categorized, the numerous "characterizations," on these bars. 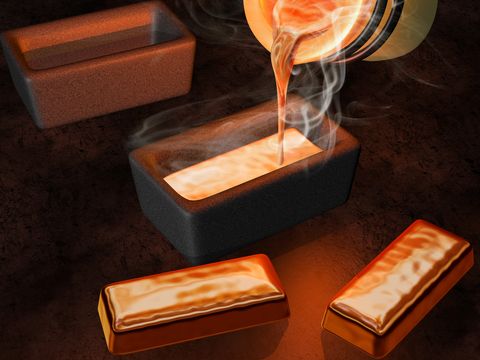 
Extruding Bullion Bars - Process in which a metal or another material is forced through a series of dies to create a desired shape or shapes. Markings are usually stamped on the bar using a hammer or a press.   Like Engelhard Cast and Poured bullion bars, company markings on extruded bullion bars will look depressed or "sunken" into the bar. 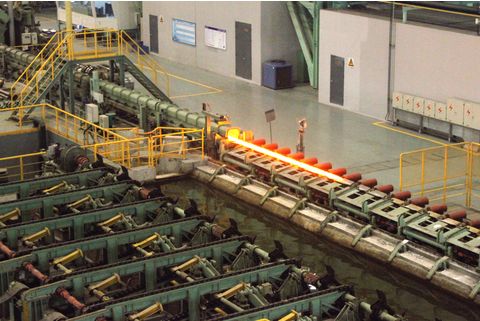 
If you are looking for Engelhard bullion serial numbers and mintage figures 'All Engelhard' is the site you want.

Refiners rarely keep a database of the serial numbers themselves for bullion bars that weigh under LBMA Good Delivery specifications.

It is common practice for refiners to put serial numbers on smaller bullion bars as a service to the individual investor, to help them to keep track of the bars they own.

However, sometimes collectors/investors will come together and start a database for the public to find and identify who made the bullion, for Engelhard bullion the site you want is "All Engelhard."

For those looking for serial numbers or mintage figures about Engelhard bullion, when click on the site, click on 'DEFINITIVE PAGES' to find the type / size of bar you are looking for.

In addition, in each section below, this guide has helped you find some of the pages on the All Engelhard's site that related to the most popular bullion bar sizes.

Engelhard stopped producing investment bullion bars in 1988, after the price of precious metals had fallen, and demand for bullion dried up.

However, Engelhard bullion bars can still be found on the secondary market click this link to see this guide's affiliated dealers who sell Engelhard Bullion.


When Engelhard was producing bullion, the silver bullion bars were by
far, their most popular and widely produced.

Engelhard made silver bullion bars as small as 5gram to as large as a 1000oz "Good Delivery" bar. 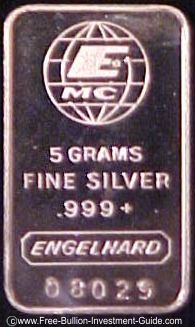 Odd sized bars are much harder to find than the more common sized bars.

Expect the value of these bars to be higher than the intrinsic value of the bullion bar due to popular demand.

Furthermore, they made several silver bullion bars of odd sizes, these sizes include:

Most of the one-ounce bars were minted and were quite possibly the most widely produced.

These bars were not only made for investors but also given as gifts, made into art bars and at the time corporations handed them out to employees as rewards.

Many of these bars seem to have been cast or extruded, although there
are minted versions of the 5oz bars.

The 10oz. Engelhard bullion bars were the first silver bullion bars to be produced by the company, in addition, these bars probably have the most information written about them throughout the web.

Although many of these bullion bars have been melted down, mintage figures for these bars range from as high as 2 million, to as low as 1.5 million.

It is virtually impossible to know how many are still in existence. 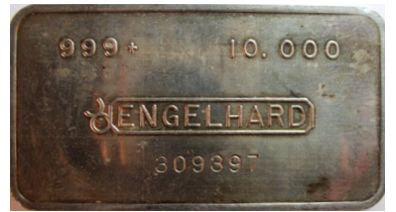 10oz Bars were both Cast and Minted. As stated above, Engelhard kind of muffled these definitions in there early produced bullion bars.

For the 10oz. Bars with a "P" prefix before the serial number, signifies a "Poured" Bar.

10oz Bars with a "C" prefix before the serial number, signifies a "Cast" Bar or Minted Bar.

Bars with no prefix were the First to be produced in the 10oz. series, like the one in the photo, above right.

The Majority of the 100oz Silver bars were poured or extruded. 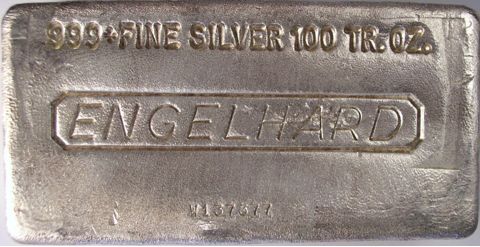 Unfortunately, some counterfeiter's have taken advantage of bullion investors by drilling these bars and filling them with lead.

About.Ag also has a couple of good pages on noticing the signs of a Fake Engelhard Bullion bar, "click," Here and Here, to see these pages.


Due to the scarcity of these gold bars and because of the odd shapes of the bars, many of these bars carry a collector's premium.

Furthermore, due to the low production of gold Engelhard bullion bars, information about them is scarce. 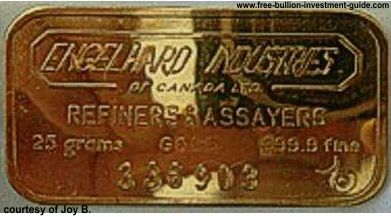 The known sizes of the gold Engelhard bars are:

1oz and smaller bars are known to be minted bars and bars above 1oz. in size are mostly cast or poured.

1oz. Engelhard gold bullion bars have been observed in both minted and poured.

Odd sized Engelhard bullion bars have also been known to be produced, the most recently observed specimen of this example was a 1.608 poured bullion bar, sold on an auction site.

The majority of serial numbers observed on the Engelhard Gold bars,
have no prefix


Known sizes of Engelhard bullion bars in both Platinum and Palladium are the 1oz and 10oz. bars and these bars are known to be minted.