Gold, Silver & the U.S. Dollar -
What Happened Last Week?
and the Answers.... 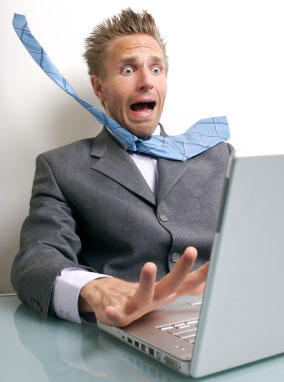 Gold and silver's drop in price last week took me by complete surprise, so last week I searched for answers, here's what I found.

In my search, I read theories that the fall in precious metals was caused by the announcement of a  "Hard Brexit" by British Prime Minister Theresa May on Sunday evening. 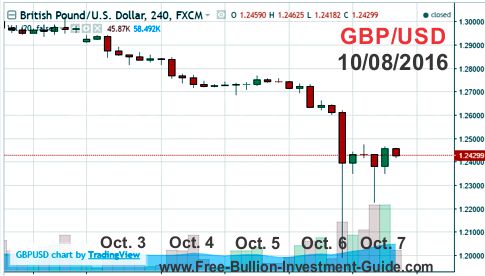 However, as you can see in the chart above, the British Pound didn't fall hard until Thursday which was mostly due to the French President's call for Britain to 'suffer' for its Brexit vote.

The call for a 'Hard Brexit' gave support to the U.S. Dollar, which in turn hurt gold, but it didn't cause the fall in gold, on Tuesday.

In my search for answers, I also read that gold's fall was caused by the IMF's report on the Global economy.

However, identifying $152 trillion in global debt and stating that Global growth will be stagnant is hardly a negative for gold.

There are several reasons behind gold's fall last week, the biggest being the Fed and those who worship it, a.k.a. the majority of market traders.

First, since the last FOMC meeting on September 21st, the markets have been looking to the Non-Farm Payroll Jobs Report for a sign of which way the economy and the Fed will move. (this is discussed in last week's post seen here)

Gold was already falling last week when it was sitting at the bottom of its ascending channel - see chart below.

Then, on early Monday, when the 'Hard Brexit' news was announced, traders sold the GBP for the USD, which didn't help gold and sent it below the ascending channel. 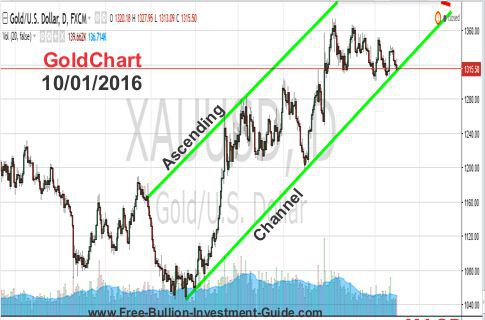 In addition, on the same afternoon as the 'Hard Brexit news was released, the Federal Reserve Bank of Cleveland's President - Loretta Mester said the economy is ripe for an interest-rate hike, which helped gold move lower.

Then on Tuesday morning, before the U.S. markets opened, the Richmond Federal Reserve President Jeffrey Lacker said rates might need to rise a lot.

So, What's Up with all this New Hawkish rhetoric by the Federal Reserve???

I think the FOMC is trying to show through this 'Fed Speak' that they don't have a political bias and that they base their decisions on 'data' and not 'politics.'

Basically, the Fed's other members are circling the wagon around Janet Yellen, after her embarrassing testimony on 9/29, in front of Congress, where she was put on the spot about the Fed's political biases - see the video here or click the link below.

After all the 'Fed Speak' and the looming Jobs Report numbers were hanging over the Gold market it started to fall.

Then once gold fell below the $1310 and $1300 support levels, massive amounts of stop orders were filled, and the price plummeted.

The same happened to silver after it fell below its $18.50 support level.

The way the markets moved after all the 'Fed Speak' should be a clear indication that the market is still hanging on the Fed's every breath and spoken word.

This is somewhat troubling for the market as a whole because when the sh*t does hit the fan, the market is going to panic.

In addition, last week, in my search for answers into gold and silver's fall in price, I found there to be a lot of negativity towards gold in the comments sections of many articles.  A little more than usual.

These people repeat the same things in the Financial Media, gold is a 'rock,' 'it's better as a doorstop,' or 'gold earns no interest.'

There are a lot of people who still don't see or understand the benefits of precious metals.

Those of us on the other side of the precious metals argument can either get pissed about this or see this as an opportunity.

I see it as an opportunity, and I'll discuss this further in the coming weeks and months.

The Blind Market Traders turn to the US Dollar as a safe haven 100-times more than they do gold because most in the market don't recognize precious metals as a safe haven.

This is why on Wednesday, I posted this quote, under the news, on the homepage:

"If you don't know or recognize what you're missing, you won't miss know it or chase after it."

(the strike are the way it was originally posted)

I'm not going to go much deeper into this subject now, but the biggest thing to remember is that when the market does wake up or even if it doesn't, those that recognize the utilities of Precious Metals will be their beneficiaries.

As mentioned in the first sentence of this post, gold's move took me by complete surprise.

In the Chart below, I've indicated the Old Ascending Channel that failed and where it failed.


I've also indicated where the Falling Channel failed and I indicated the 'New' Ascending Channel that I drew in last week's post; seen here.

Furthermore, the black line on the chart indicates the U.S. Elections 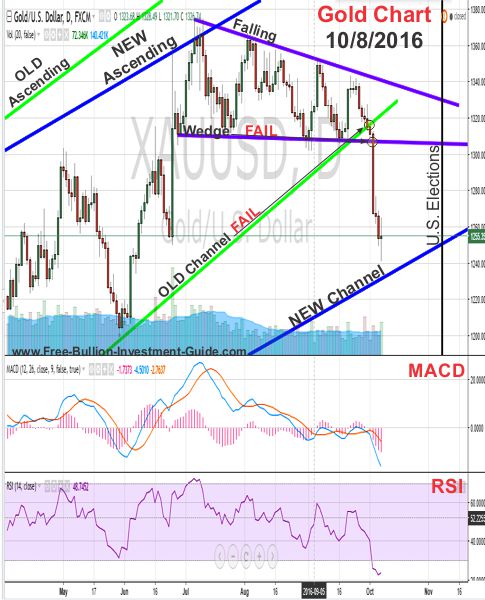 Last week, gold broke almost all of its positive trend-lines, for now, gold needs to hold onto support or break one of the resistance levels indicated below to change this new downward movement.

Also, like gold, silver broke under its falling wedge and broke its failed ascending channel. 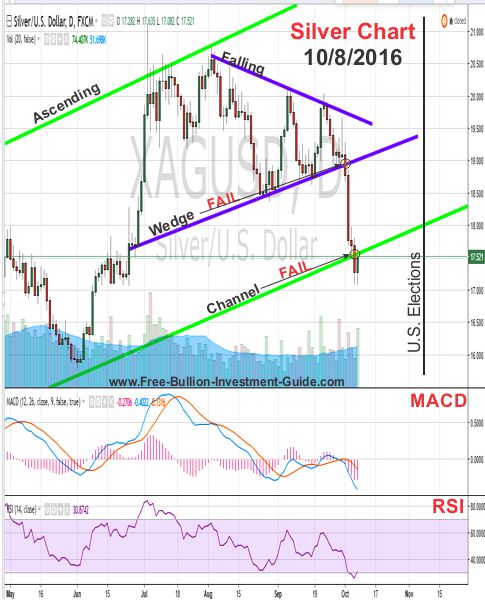 In the week to come, Silver will need to stay above its support levels, to regain support in the market.

On Thursday of last week, after the GBP had its 'flash crash', the dollar broke above its failed Rising Wedge.

Then, the next day, something very weird happened that I point out in the chart below.

The Market Opened 50cents higher than its close the previous day, and it closed Friday below Thursday's close.

How this happened, doesn't make sense, because technically speaking we are looking at a chart where the price of the U.S. dollar broke above its falling trend-line on a down day.

For this reason, I'm going to keep the falling and rising trend-lines on the US dollar chart (for now), and we'll see what happens next week. 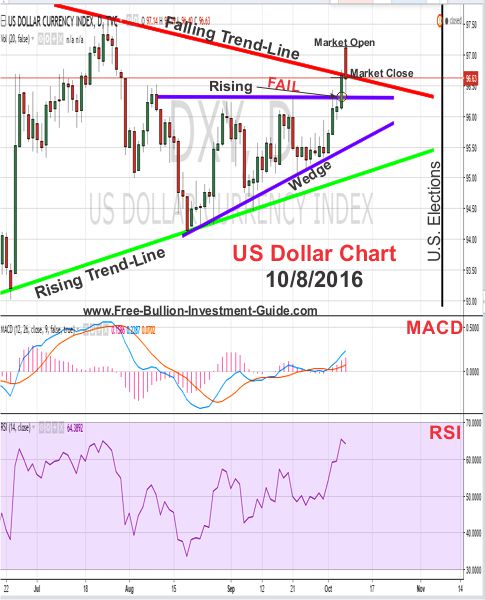 To let those who may not visit this blog know that when I can I prefer to listen to music when I work and for the last four months I’ve been sharing with the reader’s of these posts the song or songs that I liked the most while I did the work.

If you read this blog and seen the past music artists I've posted, this one may take you by surprise.

The first time, I heard Frank Sinatra was at my father's - best friend's restaurant in Middleburg Virginia, his restaurant was called The Coach Stop.

For those who may not know, Middleburg is in the heart of Virginia's horse country and it possess's some of the most beautiful countrysides you've ever seen.

My father's friend never played Sinatra in his restaurant until Frank started to eat there and the two became friends, then it was Frank Sinatra all the time.

I was about 10-years old when I first heard Sinatra and I thought his music was the coolest, not much has changed.

So this weekend, it was all Sinatra.