Dark Clouds Have Formed on the Dollar's Horizon


Tax Reform And The “Japanification” Of America - Investing


AUDIO: Doug Noland – Men Will Come and Go, but the Bubble is Forever! - FSN


Gold Mine Exploration Jumps But 2018 Output to Fall - Bullion Vault 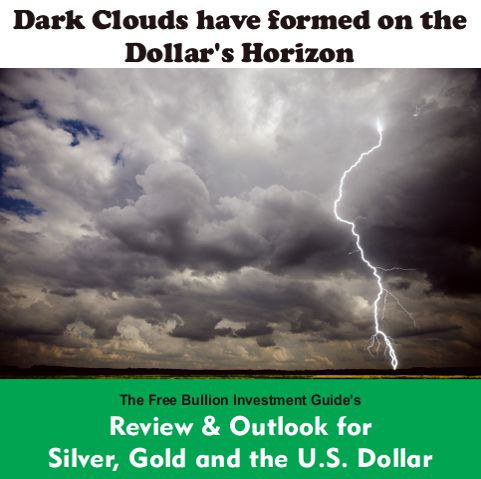 Photo above provided courtesy of pixabay.com

As stated in the title some negative patterns (dark clouds) have formed in the U.S. Dollar charts and its future isn't looking bright.

Please continue to scroll down to see the charts below and find out what was found in dollar's charts for this statement to be made.

For the week ahead, the U.S. Dollar has formed a negative price pattern known as the 'Rising Wedge.'

In the chart below you can see that the 'rising wedge' is very narrow and although the MACD and RSI are indicating that it may continue to move up it in the beginning of the week a reverse in the U.S. Dollar's price isn't too far away in the future either.

So for the week to come, we may see the price of the dollar continue to move up before the FOMC meeting, but because of the narrowness of the wedge, the U.S. Dollar is expected to confirm the negative pattern sometime in the near future. 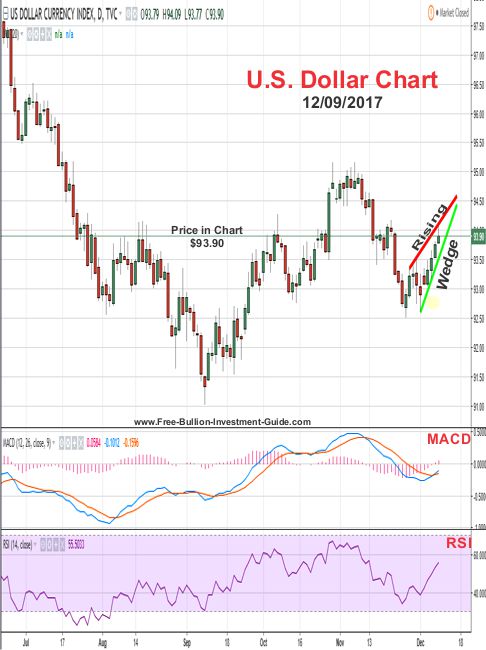 By comparing the outlook chart above with the review chart below, you can see that the U.S. Dollar did move up a little more inside the Rising Wedge.

But, after the Federal Reserve announced that they had raised interest rates by another quarter of a percent it sent the dollar tumbling confirming the expected outcome of the negative 'Rising Wedge' pattern. 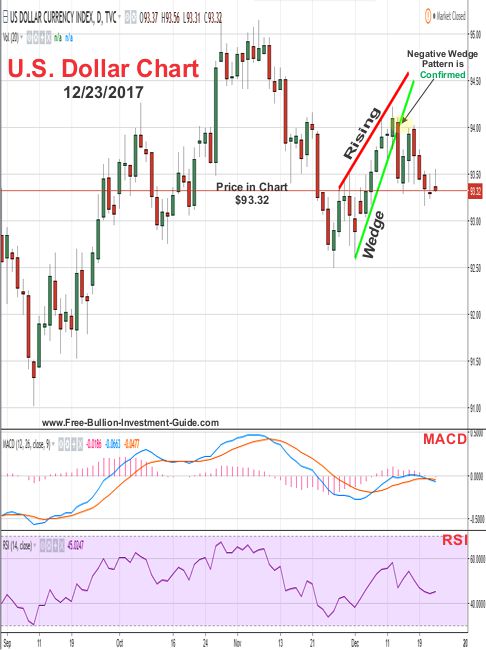 In the U.S. Dollar's chart below you can see the negative patterns or 'Dark Clouds' I was talking about in the title.

The dollar has formed two negative patterns the first is a Rising Expanding Wedge pattern and the other is a Head and Shoulders pattern.

However, the same 'Head and Shoulders' pattern looks to be forming in the dollar's MACD and RSI indicators, but first, the U.S. Dollar must break and confirm the 'Rising Expanding Wedge' before it comes close to confirming the Head and Shoulders pattern. 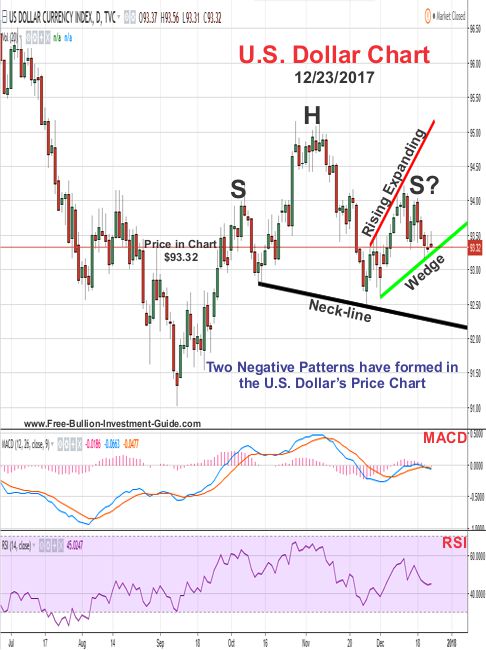 Below is silver's commentary and chart outlook from two weeks ago.

For the week ahead, silver's RSI looks to have bottomed, but its MACD still looks like the price may move down a little further.

In addition, if you view the charts from the introduction of this post, you can see that silver often moves sideways the last two weeks of the year, so perhaps we'll see more of the same this year too?

However, we cannot forget that silver also has the positive price pattern looming over it (Falling Expanding Wedge) which is expected to be confirmed sometime in the near future.

Ultimately, we'll have to wait on time to see how all these factors play out. 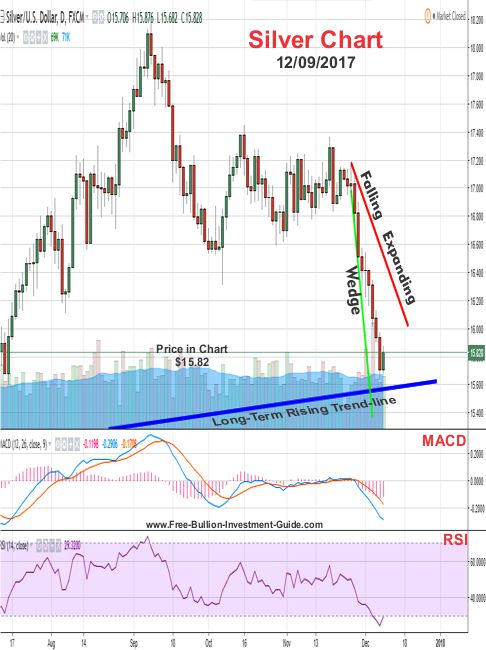 Over the last two weeks, silver's price came close to testing the level of its 'Long-Term Rising Trend-line,' but it managed to stay above it and ultimately it changed its movement, moving upward confirming the 'Falling Expanding Wedge' that was looming over it.

For the week to come, I could not find any clear patterns in silver's chart.

However, silver's MACD and RSI are both indicating that more upward movement is possible and with the forecast for the U.S. Dollar this outcome becomes more likely, but time will tell. 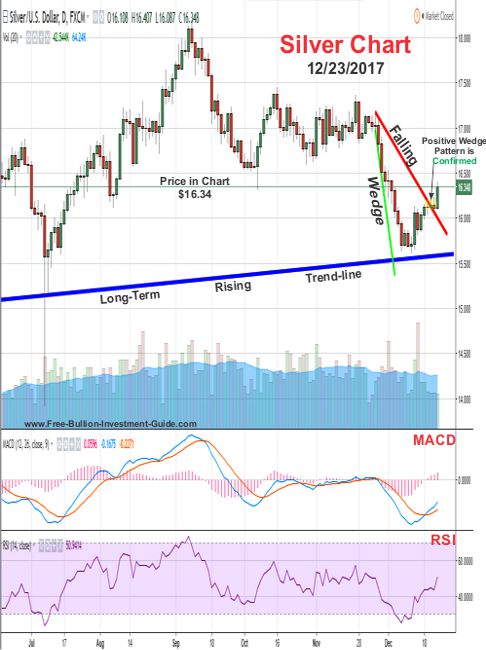 Like silver, gold's 'Falling Expanding Wedge' is still showing that a positive price change is expected to happen sometime in the near future.

However, gold's MACD and RSI are showing that more downside may be in its future.

I took a look back at how gold moved at the end of previous years, and like silver, it too moves mostly sideways until the new year begins.

So, it seems the price could go in any direction, but I'll be looking for a sideways movement in gold with an upward slant in the weeks to come. 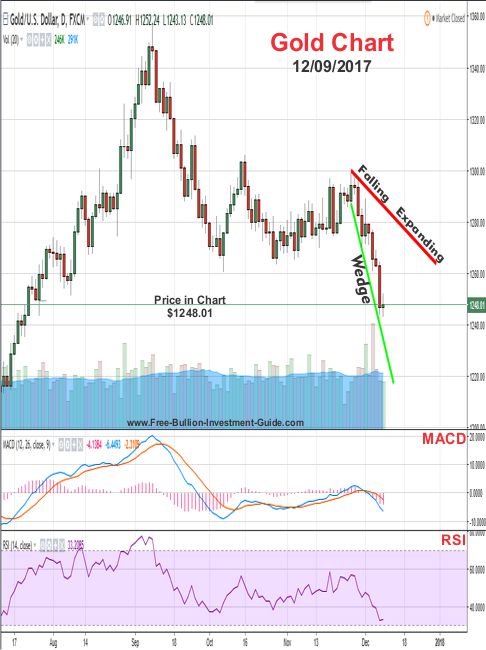 As you can see in the chart below, gold moved down and sideways a few days after the last post was published.

But later it didn't move with an 'upward slant,' instead, it just moved steadily upward and ultimately it broke the Falling Expanding Wedge, confirming it.

For the week ahead, after studying Gold's chart, I could not identify any positive or negative technical patterns.

However, also like silver, gold's MACD and RSI are giving an indication that we should see gold move higher.

Ultimately time will tell, but if the dollar falls like the patterns in its chart indicate then we should see gold and silver move higher. 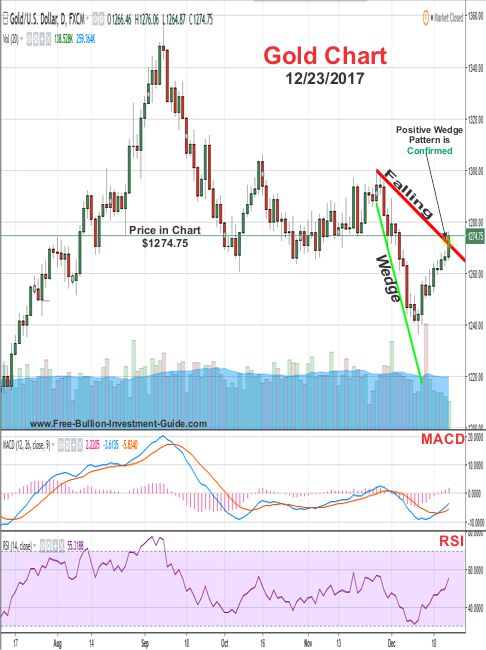