Thank you for visiting the Free-Bullion-Investment-Guide's latest blog, I hope that you and your family are having a Great Summer!

U.S. banks pay up for big deposits as consumers get pennies - Reuters


Thoughts On Gold - The Deviant Investor 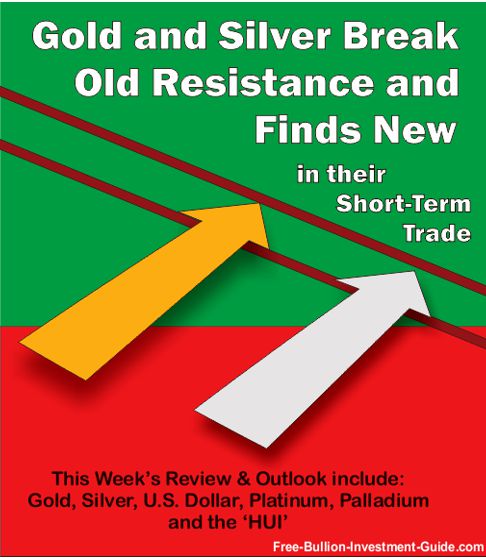 Last week’s post was about how gold and silver's prices had started to bounce up after their dramatic price drop around the fourth of July.

In that post, I showed you some new positive technical patterns that had formed in their charts, I wrote that it may take more than a week for the metals to confirm those new patterns, but I stand corrected; it took less than 5-days.

This week’s review and outlook will include Gold, Silver, U.S. Dollar, Platinum, Palladium and the ‘HUI’ – Gold Bugs Index.

Last week, I posted the chart below with the following commentary:

Last week, after the dust settled from gold's price drop, a 'falling expanding wedge' formed in gold's price chart (below).

All falling wedges are positive technical patterns, however for gold to confirm the pattern it will need to break above the upper resistance trend-line of the wedge.

In addition, gold's MACD (lower indicator) is showing that its direction is about to change from negative to positive, so we should continue to see gold climb this week, but some profit taking is also expected as it moves up. 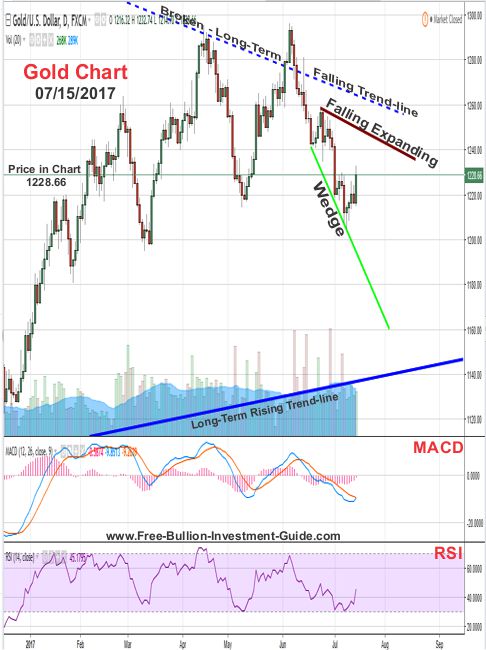 After gold broke above the Expanding Falling Wedge's upper resistance-line, confirming the pattern, its MACD and RSI (bottom indicators) show that more upside may be in store for gold.

However, the Broken ‘Long-term Falling Trend-line’ that gold broke about a month ago, still stands as resistance in gold’s move up.

But, because gold’s price has already broken this line, it should make it easier for it to break it again in the future.

So for the week ahead, it looks like gold will have some more upside, but the old resistance line may help it to consolidate below it. 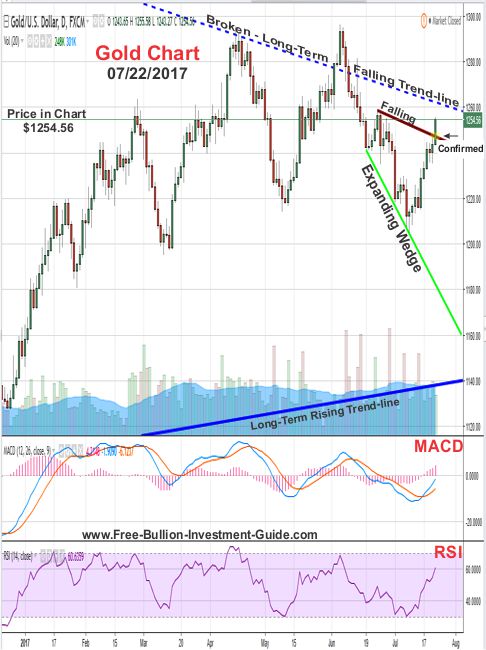 Last week, the chart below was posted, in my outlook for silver, I only expected silver to test the resistance line of the falling wedge, I didn’t expect it to break it.

Below is last week’s commentary for Silver's outlook;

“…this week we should see silver stay above the long-term trend-line and start to test the resistance (red) trend-line of its falling wedge.” 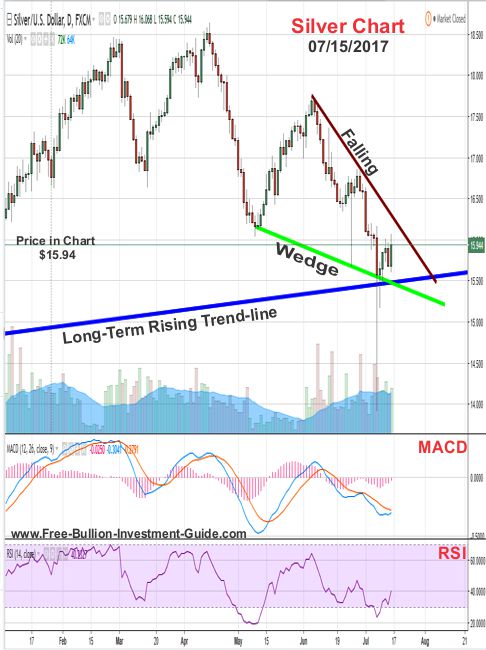 As you can see, silver broke above resistance and in the process confirmed the falling wedge's technical pattern. 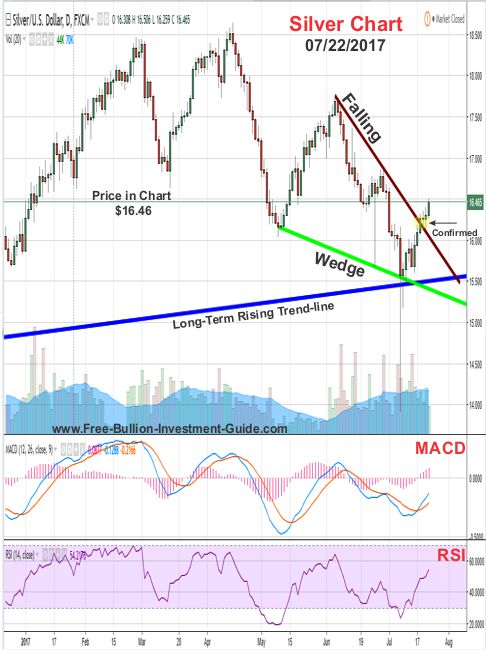 Now that silver has moved passed above the Falling Wedge, its price is currently hitting resistance at $16.50.

However, its MACD and RSI are giving an indication that it is going to move higher, but when it reaches the $16.80 to $17.20 level it will find tougher resistance.

So we may see it move up this week, but expect to see some resistance/consolidation before silver reaches the red highlighted area in the chart below. 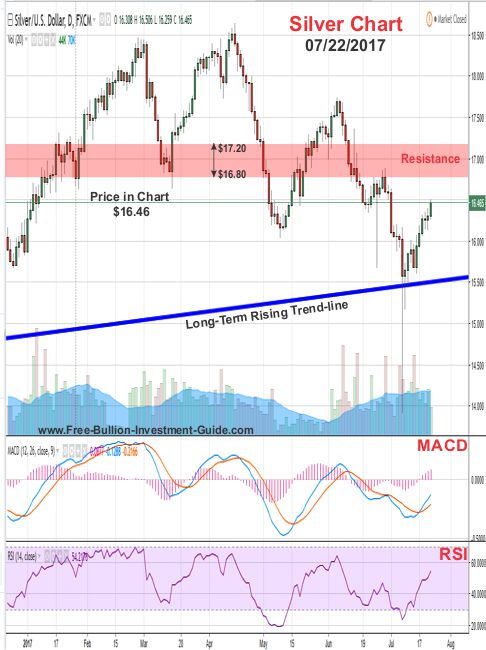 Last week, I posted the following commentary and chart for the U.S. Dollar.

When it breaks out of this (descending) channel a clearer future can be given for the dollar because it will be an indication that sentiment has changed; either for the better or the worse. 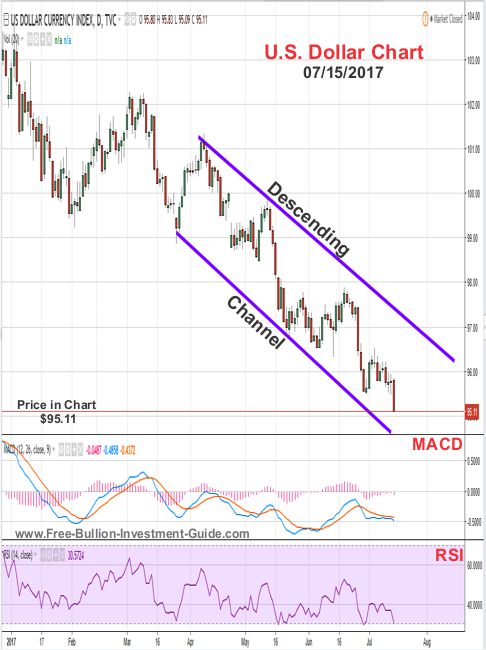 As you can see in the chart below, last week, the U.S. Dollar broke below the descending channel, and its future is not looking bright.

However, for the immediate future, the dollar looks like it may be bottoming out, its RSI and MACD are moving at the bottom of their indicators and the dollar has been moving consistently lower for almost two weeks, so some sort of upside correction is expected. 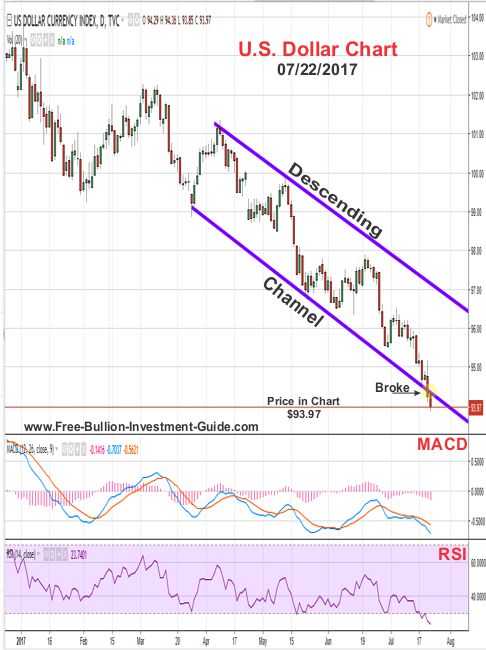 Below are last week’s commentary and chart for Platinum

“…in the chart below, Platinum did confirm the positive Falling Wedge, but it is still trading inside the Descending Channel.

So nothing much has changed, except to say that Platinum's MACD does look like it is about to turn up, so the price of platinum could start to test the upper falling trend-line of the descending channel this week.

Plus, I’ve been saying for the last several weeks the following about Platinum: 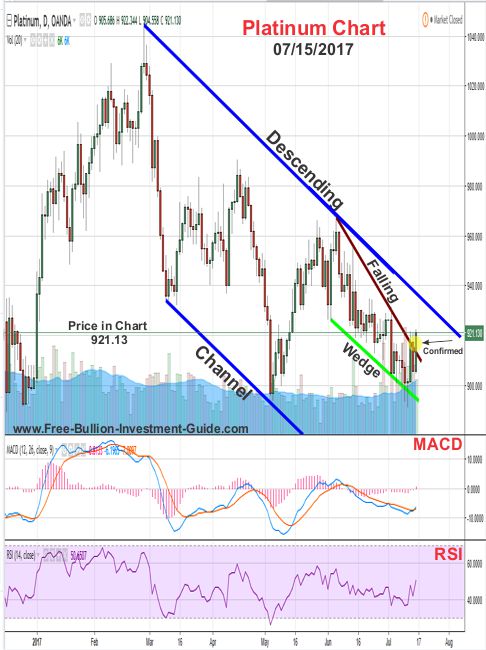 As you can see in the chart below, last week Platinum did test the upper trend-line of its descending channel and broke it.

Note: All channels break, when they do, it's a sign that the old sentiment has been broken and a new outlook is in store for the asset.

For Platinum, this is a good sign that its price will stop falling inside this channel.

In the immediate future, no clear patterns have formed in Platinum's chart, its MACD looks like it may rise this week, but the price will be hitting a lot of resistance between the $940-$960 price levels, so we may see it move up to this price area then consolidate; time will tell. 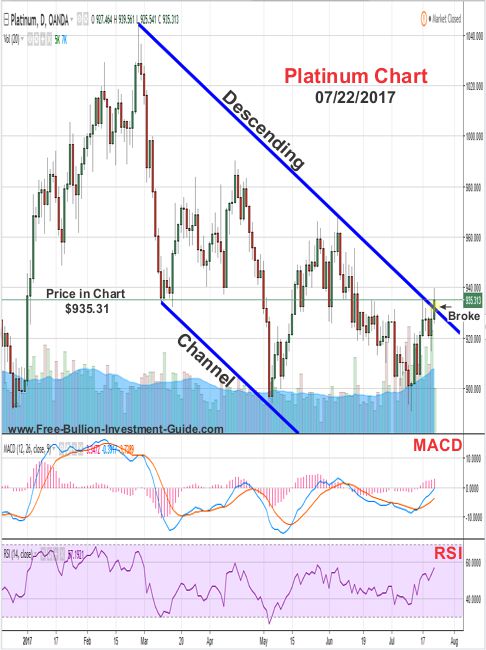 For palladium,  the chart below was posted and I simply stated that the chart had formed a falling wedge and that sometime in the future the price of the precious metal is expected to break above it.

Here’s what was written:

“So sometime in the near future, Palladium is expected to break this pattern, although this week's chart its MACD and RSI are showing that perhaps some pullback will happen.” 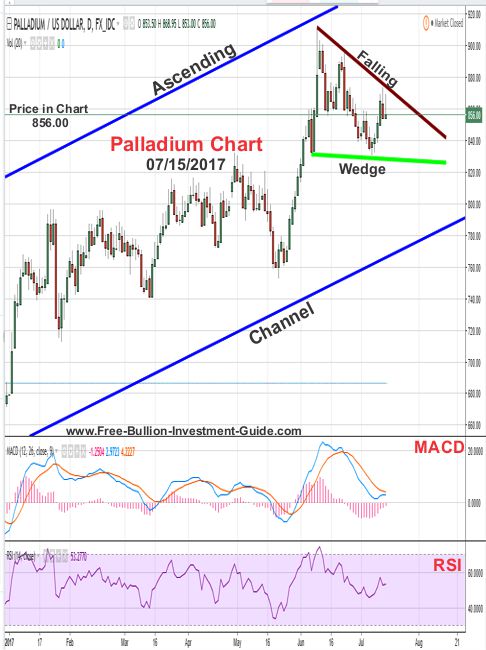 As you can see in the chart below, palladium did pullback last week as the MACD and RSI suggested

This week, the lower indicators aren’t giving much of indication as to which way the price of palladium will move.

But, the price chart looks like it may stop falling, so it could be ready to break the falling wedge’s upper resistance-line. 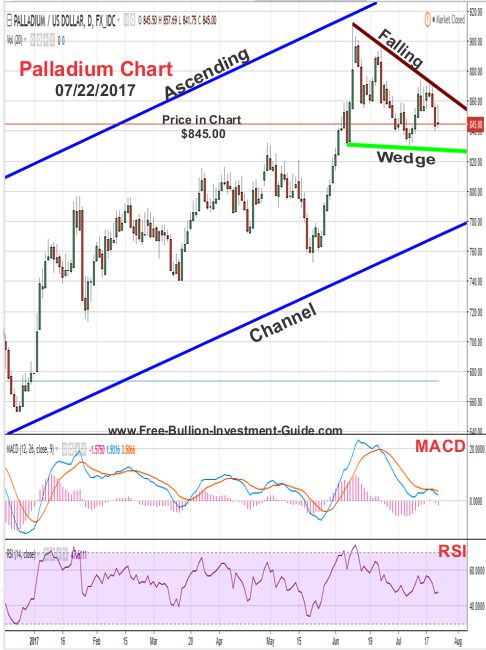 A few week’s ago, I wrote that I would start studying random charts that relate to the precious metals sector.

At the bottom last week’s review and outlook (here), I updated you on the GDX – Gold Miners ETF, this week I’m going to focus on the HUI – Gold Bug’s Index.

The chart below is of the HUI, which looks very similar to the GDX chart from last week; Coincidence? Doubtful.

The HUI and the GDX both have falling wedges in their charts which are positive signs, meaning that both prices are expected to rise above the upper falling trend-line of the wedge.

When this happens is anyone’s guess, but when it does I’ll follow up on it. 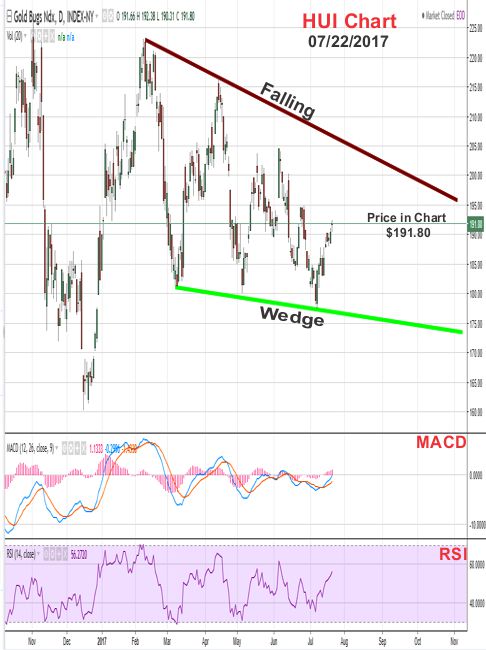 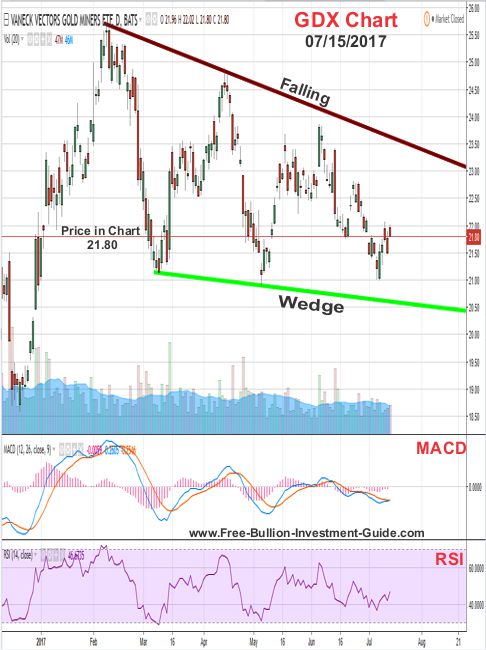