Gold Is at a 5-Month Low: Here's Why Gold Stock Investors Shouldn't Worry - The Motley Fool


A hawkish Federal Reserve is here - THE HILL


The IMF - What Is It - And Is It Overrated? - Advancing Time 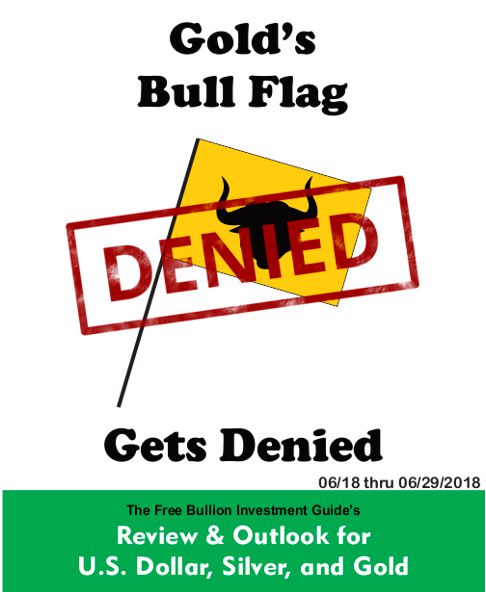 Last week, the outlook below was posted for the U.S. Dollar.

In the U.S. Dollar's outlook chart below, the long-standing 'Rising Expanding Wedge' is the only pattern that I've been able to identify.

As to when the pattern will be confirmed just isn't known right now and can't be predicted.

It's doubtful that, that outcome will last very long, but time will tell how long it will be until the 'Trade War' starts to hurt the dollar.

As for the U.S. Dollar's outlook, it looks like its price will consolidate this week after it shot up in price on Thursday, plus, the $95.00 price level looks to be holding the dollar's price down below it.

The 'Rising Expanding Wedge' is still expected to be broken, it just a matter of time before it does. 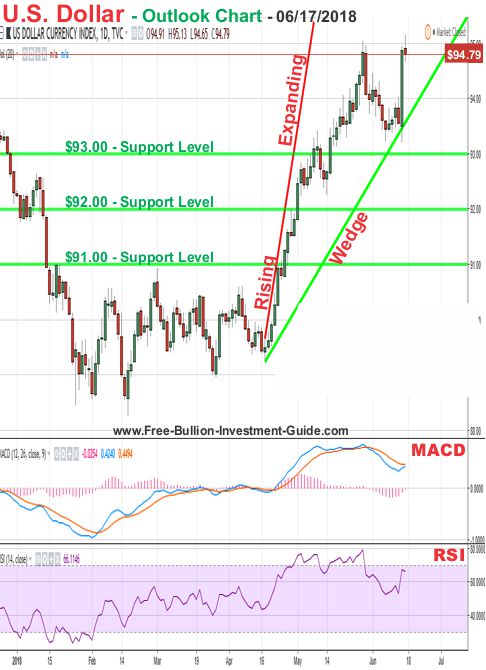 In the U.S. Dollar 'review chart' below, you can see that the U.S. Dollar briefly peaked above the $95.00 resistance/support level, but it was unable to stay there and has started to drop.

As mentioned last week, the price of the dollar wasn't expected to break the 'Rising Expanding Wedge' yet, but it now has another negative pattern in its chart, see this week's outlook below to for more info. 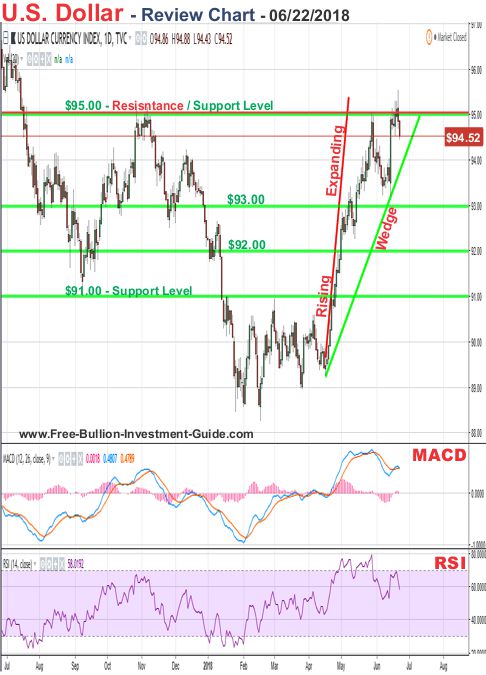 In the outlook chart below, you can see that the U.S. Dollar's price chart now has two negative 'Rising Expanding Wedge' patterns.

The older one is expected to be confirmed before the new one, simply because of where their lower trend-lines fall.

This week we may see the dollar finally fall below the bottom trend-line of the two-month-old 'Rising Expanding Wedge,' confirming it, simply because it seems the 'Trade War' is heating up.

The tariffs in the Trade War aren't supposed to take effect until July, so because the market is often seen as 'forward-looking,' we may see the expected effects of a 'Trade War' start move the dollar lower.

So for the week to come, we may see the dollar finally break below the older 'Rising Expanding Wedge' and possibly the new one too.

The U.S. Dollar's movement, this week, is mostly up to how the fundamentals in the market shape up.

If there is some kind of positive break-thru that keeps the 'Trade War' with China, Europe, and other countries from happening, then we may see the dollar abruptly stop its fall and either consolidate before more information is released or it may continue to move higher.

If the 'Trade War' starts as expected, we should see the dollar fall more in price...Time will tell. 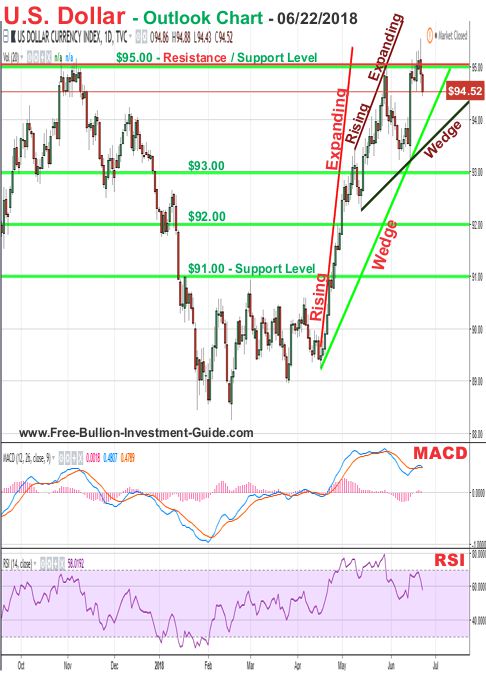 Last week, the following outlook was posted for Silver.

Just by looking at the chart below you can see that silver's price has had its share of 'ups and downs,' gold's chart doesn't look too much different.

This year, the price of silver (and gold) have often given silver investor's a sliver of hope by slowly climbing in price, then have those hopes dashed when the price drops like a stone, in a day or more.

Fact is, silver hasn't moved much overall in price, it's mostly moved sideways in 2018. 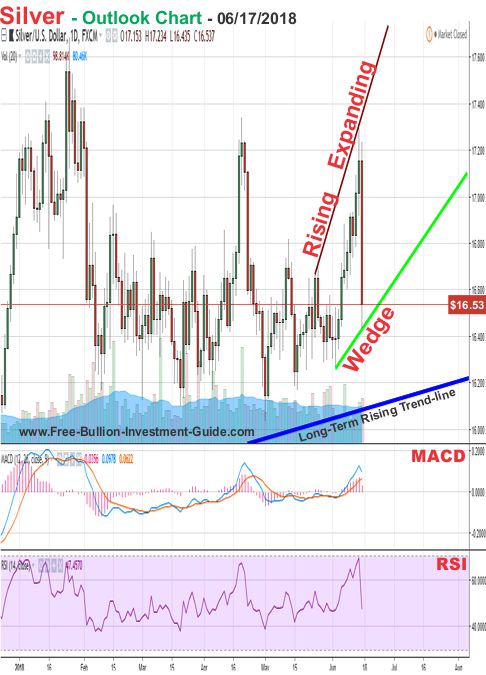 
By looking at silver's review chart below, you can see that it followed through in its fall much like it has previous times this year.

It fell for a few more days after last week's post, then after it confirmed the negative 'Rising Expanding Wedge' pattern, it briefly consolidated, and now it's starting to move up again. 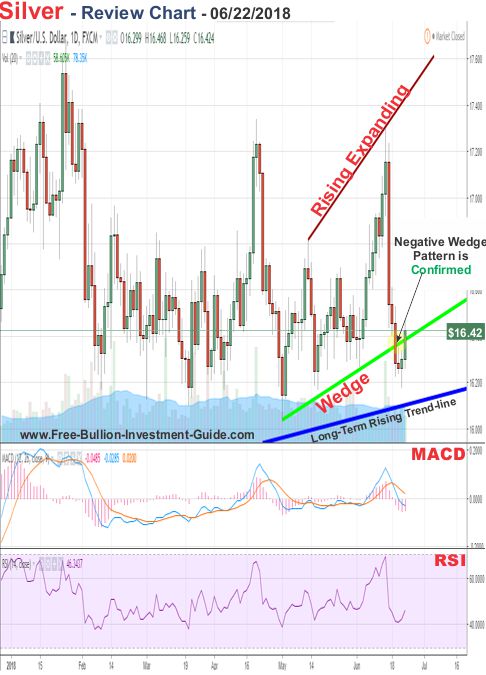 In silver's outlook chart below, you can see that it has formed a 'Falling Wedge' pattern.

Even though this wedge is considered to be a positive pattern, because of its proximity to the 'Long-Term Rising Trend-line' its positive effects could be brief.

If the price of silver falls below that rising trend-line, which currently sits around the $16.25 level, we could easily see silver fall below the $16.00 level and lower.

Silver's riding a double edge sword if a full-blown Trade War occurs it could hurt silver's industrial market, which could send its price lower.

However, silver could see a rise, this week,  if traders run to it for its safe haven/inflation hedge side of the market.

For silver's outlook, the 'Falling Wedge' is broad enough that the price has room to move inside it before it either confirms or denies it.

Personally, I'd like to see it rise and get away from its 'Long-Term Rising Trend-line, but I'm only an interpreter and because of all the variables in the market, silver could literally move either way this week. 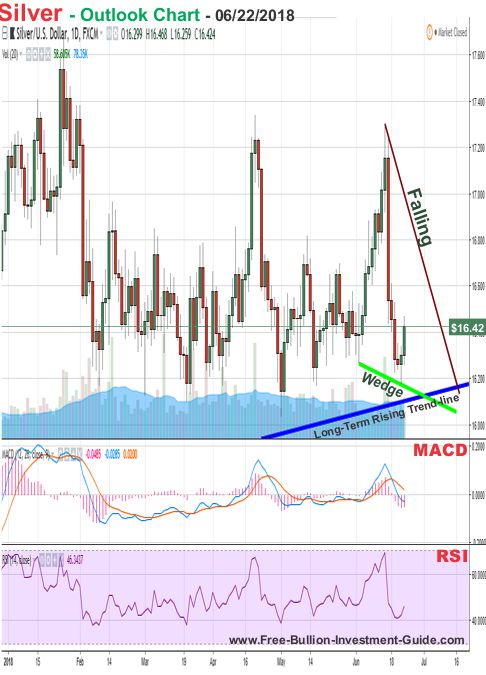 Last week, the following chart and commentary was posted for gold's outlook.

In gold's outlook chart below, I've put the 'Bull Flag' in dotted lines because the pattern looks like it may be on its last leg, but it can be drawn, so it's still relevant.

Plus, I've studied the gold chart long enough and moved the trend-lines to show another Large Positive pattern is lurking behind the 'Bull Flag,' if it is denied, but I'll address that depending on how gold moves in the future.

For now, gold's outlook chart is showing another positive 'Falling Wedge' pattern, as to how soon this one will be broken is anyone's guess.

Perhaps, if the speculators in gold's market buyback, this week, the long positions they sold off on Friday, we'll see the 'Falling Wedge' confirmed sooner, rather than later. 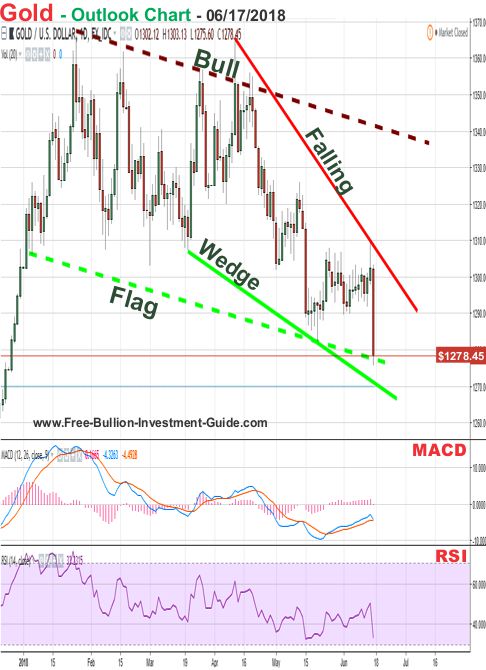 In the 1st Gold 'review' chart below, you can see that, as stated, the 'Bull Flag' was on its "last leg" last week, and got denied.

In addition, in last week's outlook, I stated that "another Large Positive pattern is lurking behind the 'Bull Flag," but, Gold's price drop was too much to salvage any of the old trend-lines, and it got denied too. 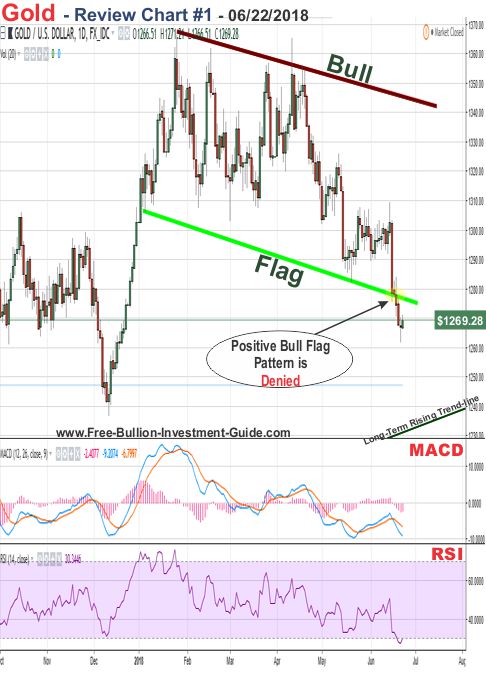 The other pattern that got denied in last week's outlook was the positive 'Falling Wedge' pattern in gold's price chart. 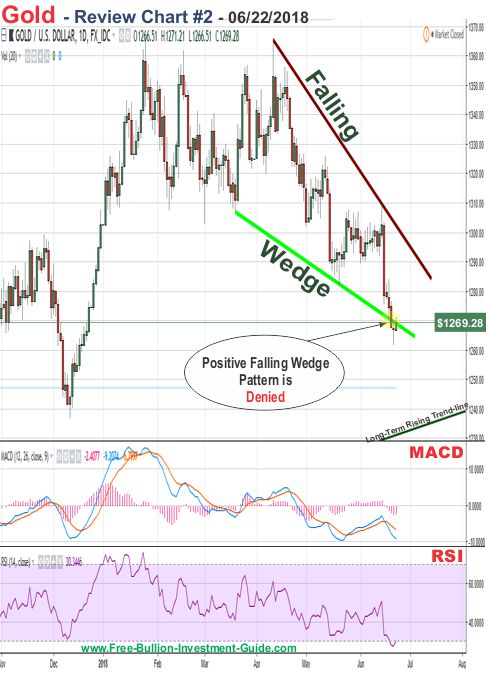 For most of this year, gold, unlike silver, has been trading well above its Long-Term Rising Trend-line.

But now, as gold has sold-off, it has helped it come down to silver's over-sold levels, and has brought its 'Long-Term Rising Trend-line' back into view.

However, in gold's fall, it has now formed a positive 'Falling Expanding Wedge' pattern.

Like silver, it too has been hit by investor's taking on more risk.

But, that may change this week, as the consequences of a 'Trade War' gets closer, and as a consequence gold may rise as traders seek a safe haven.

In addition, gold's lower indicator's (MACD & RSI) look to be showing that gold's trading deep in oversold territory and could be about to take more of a move up.

Ultimately, time and fundamentals will show us, this week, as to how gold will move. 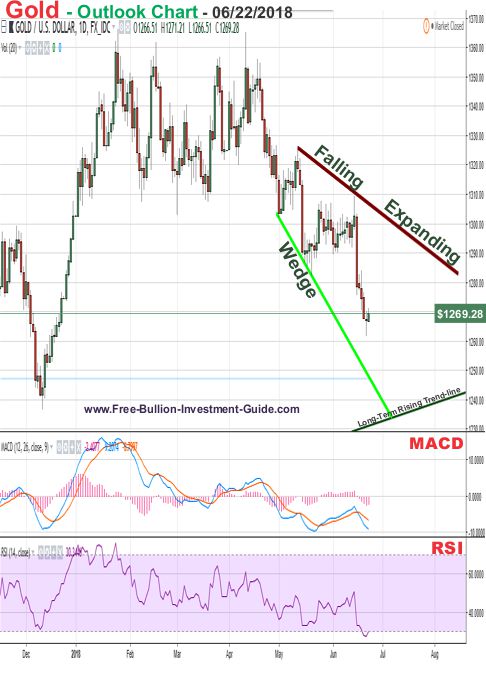