Silver and Gold are Getting
Squeezed


Gold can get to 5 year highs if it can clear one technical hurdle: Bank of America - CNBC


Charts: Household Debt And Credit Report: Up $536B in Q1, Another Peak - Advisor Perspectives


Comex is a Side Show - FOFOA


Will interest on the debt exceed defense spending by 2022? - PolitiFact 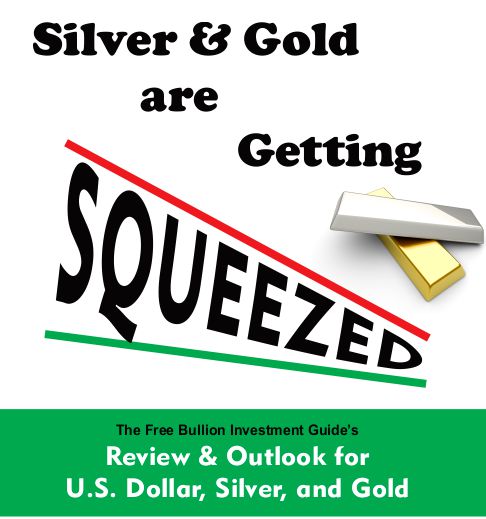 Three weeks ago, the following outlook was posted for the U.S. Dollar.

In the outlook chart below, the dollar has created a 'Rising Expanding Wedge' pattern.

The pattern is a little more narrow than the one found in the 10-year Treasury Note's chart discussed above, in this blog post's introduction, but its negative expectations are the same.

In the title of this blog, this question is implied: Will the Dollar's breaking of barriers last?   A: Time will tell.

My eye is on the $91.00 price level for the dollar, the line is now green because after a price has broken above a resistance level it becomes a support level.

However, now that the dollar has broken above it, it will have to show a lot of resilience to stay above it.

For this week's outcome, the FOMC has a meeting on May 2nd, if the Fed raises rates after this date, a pullback by the dollar is almost inevitable, but if they don't raise rates, then perhaps the dollar may trade inside the 'Rising Expanding Wedge' before it confirms it, to the downside, sometime in the near future. 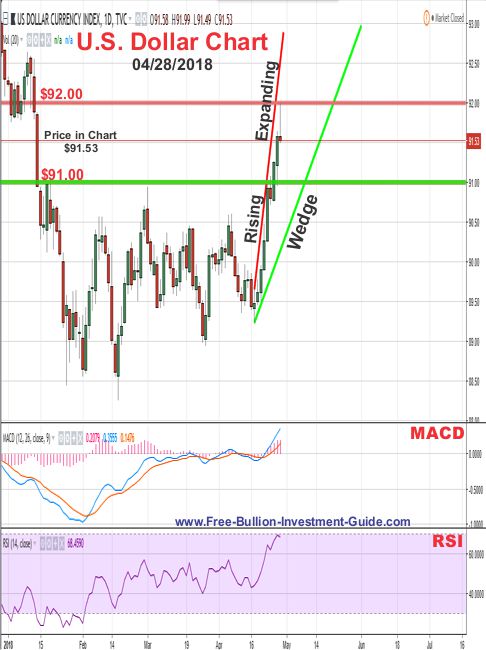 In the U.S. Dollar's Review & Outlook chart below you can see that the dollar has consistently moved higher over the last three weeks, and has yet to come close to confirming the 'Rising Expanding Wedge.'

The FOMC didn't raise rates on May 2nd, and the dollar has had the 'wind at its back' with relatively good political and economic news (North Korea, Jobs Numbers).

My eye was on the $91.00 level, but the dollar has basically left it in its dust, it has since crossed the $92.00 and $93.00 price resistant levels turning them into support levels.

Can it go higher?  "Yeah," right now, fundamentals in the bond markets are fulling the dollar's rise.

Technical patterns will always take a backseat to Market Fundamentals and as long as bond yields continue to move up, so will the dollar.

So, the outlook for the is simply to expect more of the same until market fundamentals start to set-aside for the dollar. 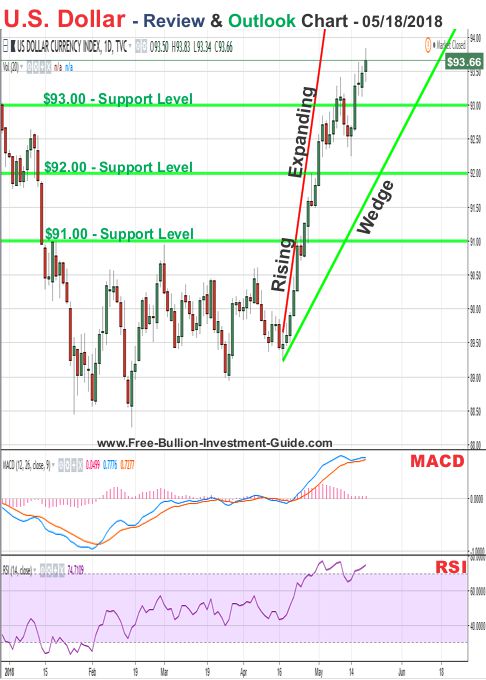 Note: Work on the silver charts has been done over the last three weekends (since the last blog post), you will see this work in the extended silver review, below.

In the last blog post titled: The Dollar Breaks Barriers. But, Will it Last?,  the chart and commentary below was posted for silver's outlook.

In silver's outlook chart below, it has formed a 'Falling Expanding Wedge.'

The pattern is a positive pattern and it is a narrow wedge, so silver could move above it sometime this week.

However, because the 'Rising Expanding Wedge' is still looming in silver's price chart, the precious metal could also trade down and confirm the older pattern before it confirms the new one.

With the FOMC meeting happening this week on May 2nd, it's almost a toss-up as to what will happen in silver's chart this week. Ultimately, time will tell. 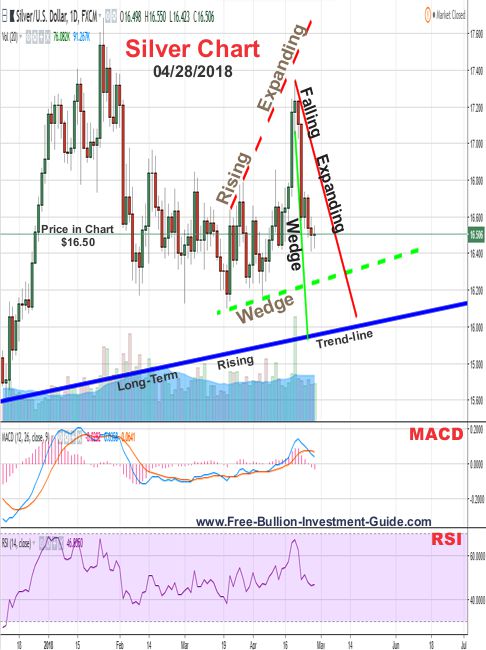 As you can see in the chart below, basically what was stated in the last outlook above, is what happened in the silver price chart below.

"because the 'Rising Expanding Wedge' is still looming in silver's price chart, the precious metal could also trade down and confirm the older pattern before it confirms the new one." 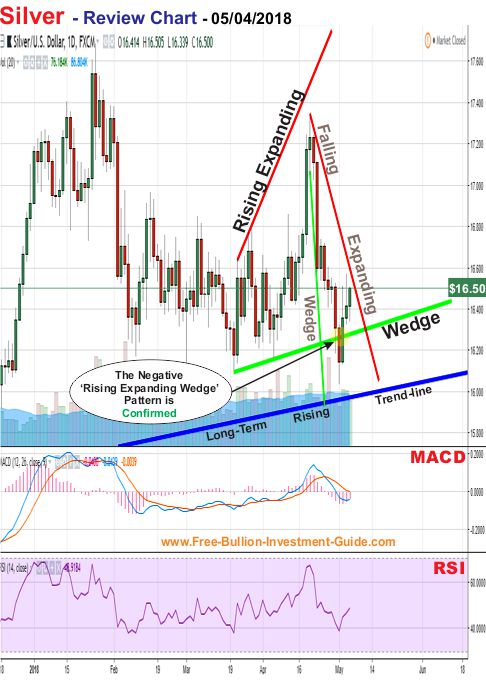 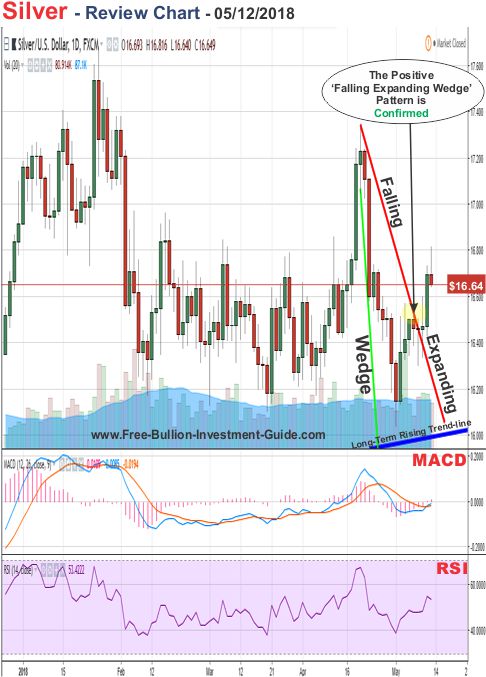 In the silver outlook chart below, you can see that it has formed a positive 'Falling Wedge' pattern.

As to when it will be confirmed is anyone's guess, but there are a few things to keep your eye on.

First, as you can see, the 'Long-Term Rising Trend-line' is in the 'Falling Wedge' pattern, if silver falls below that line, it won't be a good sign for silver's future, even if it confirms the 'Falling Wedge pattern.

But, we'll discuss that if it happens, for now, I'm hoping it doesn't.

The other factor to follow is the U.S. dollar's movement because if the dollar continues to rise we can expect silver to continue to move around and get squeezed inside this 'Falling Wedge' pattern.

So, even though the 'Falling Wedge' is a good pattern for silver to be in, there are some 'negatives' it needs to avoid for its future to be bright.

For the week to come, silver looks like it may continue to move sideways, but if market fundamentals turn negative for the dollar it may confirm the positive wedge sooner rather than later, time will tell. 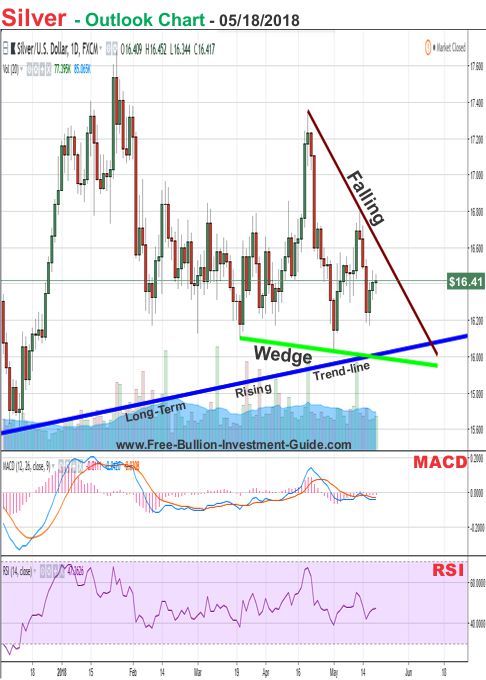 Three weeks ago, the following charts and commentary were posted in gold's outlook.

In gold's outlook chart below, it has formed a positive 'Falling Wedge' pattern inside its 'Bull Flag.'

As previously stated, the 'Falling Wedge' is a positive pattern, so it is expected to be confirmed by the price of gold breaking the pattern to the upside.

Perhaps when it breaks the pattern, to the upside, it could also confirm the 'Bull Flag,' but it will need to be a strong and convincing move up for the price of gold to break above the 'Bull Flag.' 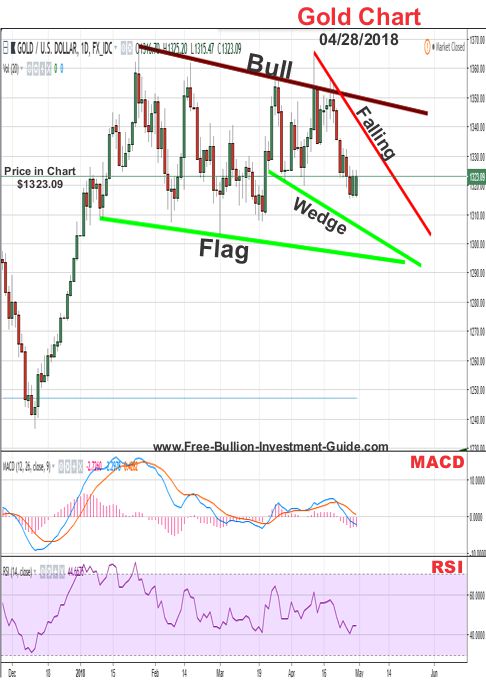 Over the last three weeks gold has continued to bounce up and down inside the positive 'Falling Wedge' pattern.

That was until early last week when the both patterns were broken and denied as drawn in their current forms.

But as you will see gold's outlook, the positive patterns can still be drawn. 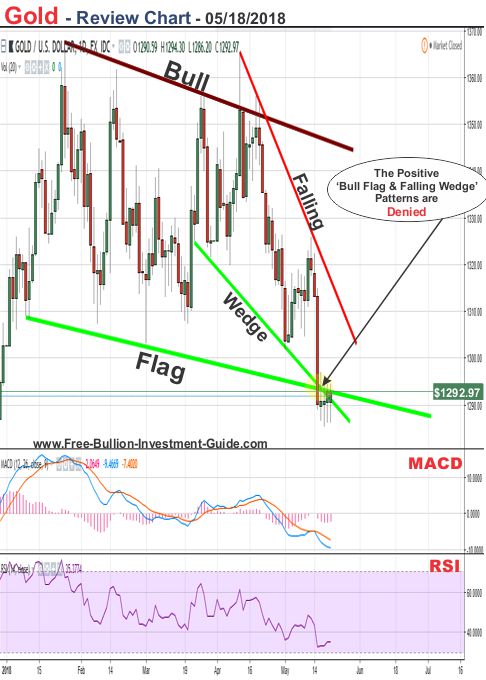 As mentioned in the review above, the positive patterns in gold's chart can still be drawn, and as long as the technical patterns can be drawn, they are still relevant.

For gold's outlook this week, like silver, gold's future mostly depends on how the U.S. dollar moves, if market fundamentals for the dollar turn negative, then we may see gold move up and confirm the 'Falling Wedge' pattern.

Time will ultimately be the judge as to how the precious metals move.

In addition, for gold to break and confirm the 'Bull Flag,' I still agree with my previous statement from three weeks ago:

"it will need to be a strong and convincing move up for the price of gold to break above the 'Bull Flag."

Perhaps, that strong and convincing move may come when the FOMC moves to increase interest rates as is expected on June 13th, but that's just speculation (on my part), yet it's just one more thing for gold investors to think about, as time moves on. 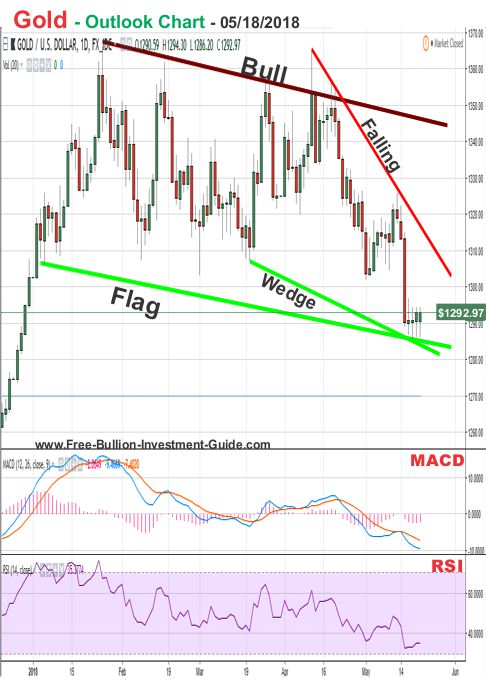