This Notoriously Cyclical Sector Is Starting to Boom - Daily Wealth


Tocqueville: Review of 2017 and Outlook for 2018 by John Hathaway - Tocqueville


Much Talk About Market Sweet Spot But Nothing Different - Advancing Time


FAKE BULLION (CANADA): All that glitters may be fake gold: 2 charged in alleged scam - CBC


Federal Reserve thumbs nose at Congress yet again on inflation "While the Fed has the tools to deliver stable prices, it has chosen not to. From 1792 to 1912, U.S. prices rose 3 percent. In stark contrast, since the creation of the Fed in 1913 to 2013, prices rose a whopping 2,380 percent." - The Hill 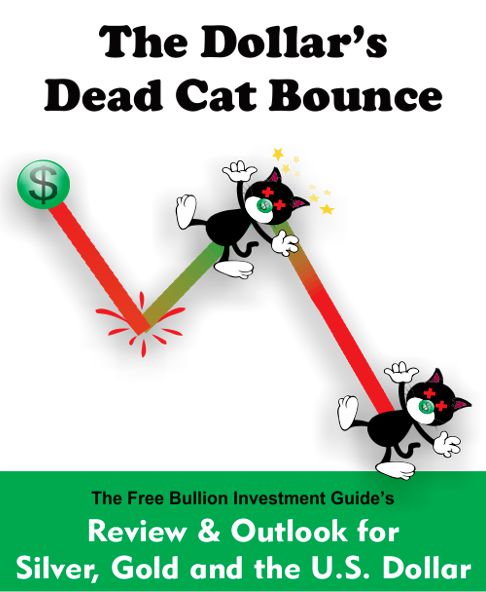 Two weeks ago, in this guide's last blog post, I mentioned the following about the dollar's future rebound.

At the time of the last post's writing on January 7th, it was too early to say what was going to happen, but a 'Dead Cat Bounce' is what happened to the U.S. dollar after it briefly confirmed the 'Falling Expanding Wedge.'

The question is:  Why did it happen so soon?

Shortly after the last blog post was posted, all looked to be going as expected.

The dollar was rebounding and gold and silver were pulling back in price as the blog post's title stated: A Rebound in the Dollar will cause Silver and Gold to Dip.

Then, early in the morning on Wednesday, January 10th, after the dollar confirmed the positive 'Falling Expanding Wedge' pattern, Bloomberg released an article with the following headline "China Weighs Slowing or Halting Purchases of U.S. Treasuries " - Bloomberg 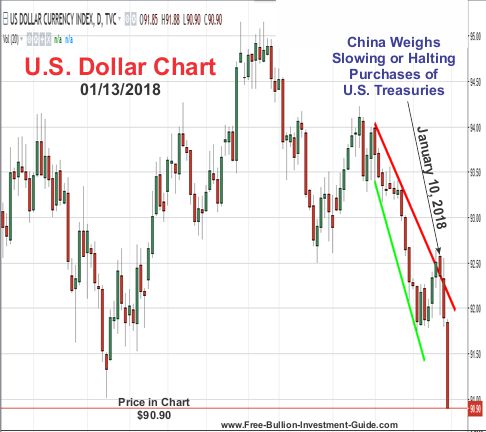 The article states that some of China's senior government officials had recommended slowing or halting purchases of U.S. Treasuries.

However, the Bloomberg story doesn't go into any specific detail about why they stated this, nor does the story say which government agency the 'senior government officials' work for in China.

Regardless of who in the Chinese government said that it was contemplating slowing or ending their purchases of U.S. Treasuries, the story was enough to make traders 'freak out' and sell the dollar, making it drop in price, halting its rebound.

In my preparation for this blog post's introduction, I looked up the latest U.S. Treasury Department's report of Major Foreign Holders of Treasury Securities; here.

As of this blog post's publishing, the report was last updated on January 17th and its most recent records are as of November of 2017.

In addition, the U.S. Treasury Department report shows that over the last year China has increased their purchases of U.S. Treasury Securities by over $100 billion.

So, when in the future we see China abruptly halt and/or drastically reduce its purchases of U.S. Securities, the fast drop in the dollar will be justified.

Furthermore, this latest movement in the U.S. Dollar should stand as a wake-up call for those who don't own some precious metals because when China sells its U.S. Treasury investments the dollar will crash.

An investing truth is that investments are bought to be later sold.

China isn't collecting U.S. Securities, which means sometime in the future when the time is right for them, China will sell their U.S. Treasuries investments.

But, until that happens, as the charts below suggest some sort of rebound is expected in the U.S. Dollar. 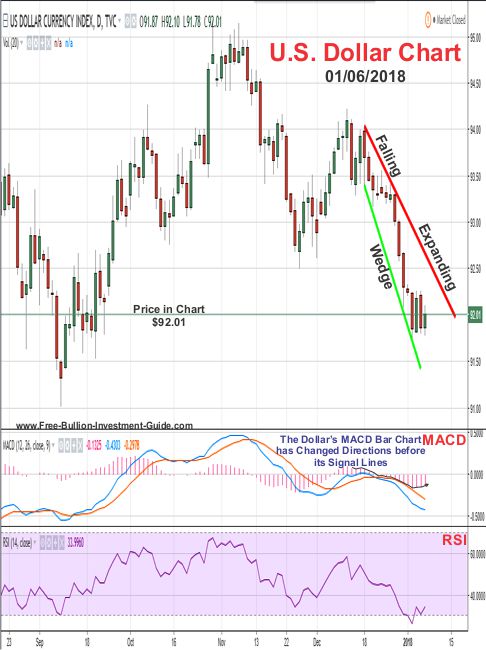 In the chart below, you can see that the U.S. dollar briefly bounce up and confirmed the narrow 'Falling Expanding Wedge' pattern.

However, after the Bloomberg article mentioned in the intro was released, the dollar ended up tumbling down like a dead cat. 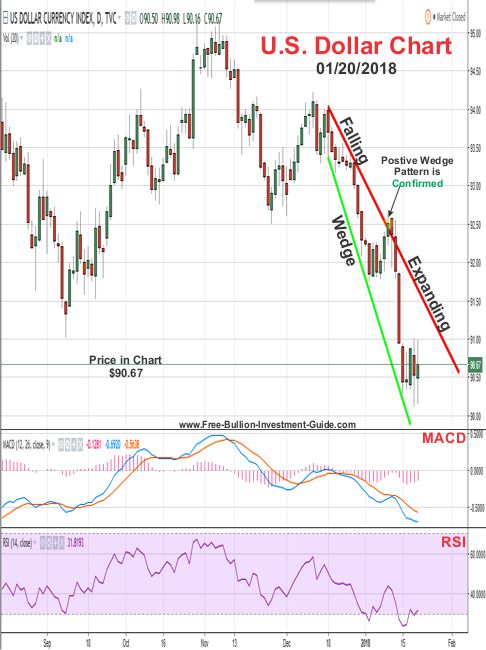 In the U.S. Dollar's outlook chart below, I adjusted the upper trend-line of the positive 'Falling Expanding Wedge' pattern.

Even though the pattern was confirmed two weeks ago, it's still the most prevalent technical pattern that can be found in the U.S. Dollar's chart, so because of this, some sort of rebound in the dollar is still expected.

In addition, before the Bloomberg article was released more of a rebound in the dollar was expected prior to its 'dead cat bounce', but now it is trading low in oversold territory as its MACD and RSI indicate.

So, at the very least, the U.S. dollar is expected to break above the new upper trend-line of the 'Falling Expanding Wedge' sometime in the next week or two. 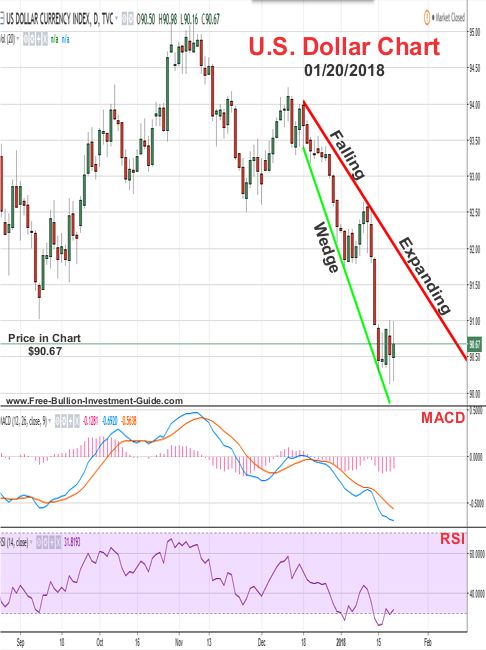 Two weeks ago, I wrote the outlook for silver and posted the chart below.

As silver rose in price, the Rising Expanding Wedge in the chart below slowly started to take shape.

Now that the price of silver has moved up, it looks to be in the process of a pullback, the negative 'Rising Expanding Wedge' pattern isn't the only sign that indicates this will happen.

Another negative sign is in Silver's MACD chart below, its bar chart, like the dollar, has started to move in the opposite direction of its signal lines.

Due to all of the negatives in silver's chart, we should see a pullback in its price and the 'Rising Expanding Wedge' pattern is expected to be confirmed sometime in the next week or two. 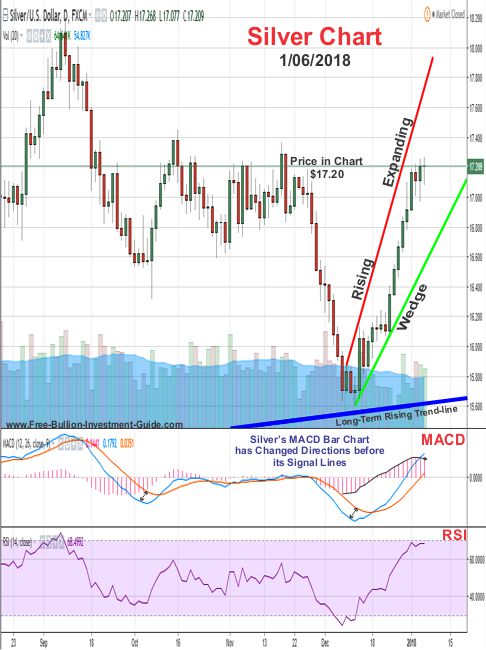 In the chart below, you can see that a pullback did start to take place in silver's price chart, but after the Bloomberg story came out on January 10th, it bounced back up, giving us another example of where Fundamentals always override Technical Analysis.

However, after the hype of the story died down silver came back down in price confirming the negative 'Expanding Rising Wedge' pattern. 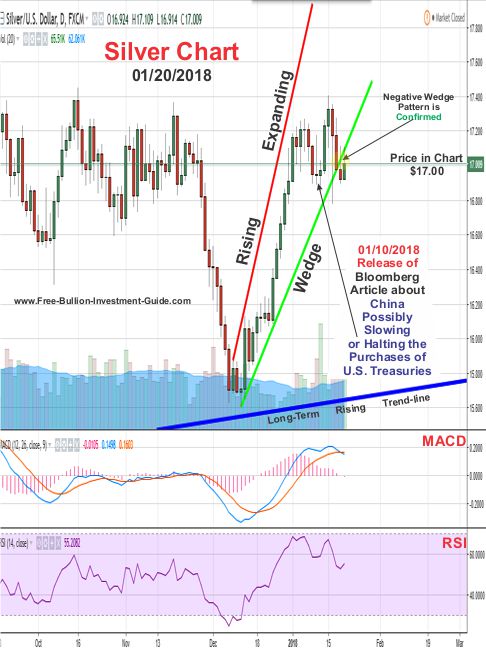 In Silver's outlook chart below, it has formed a positive 'Falling Wedge' pattern.

The pattern has just formed and the MACD and RSI are both giving the indication that the price of silver may continue to consolidate inside of the wedge before it moves out of it.

Plus, the U.S. Congress is currently dealing with the shutdown of the government, so until 60 senators can agree on a funding bill, we may see silver flirt with the upper trend-line sooner rather than later, ultimately time will tell. 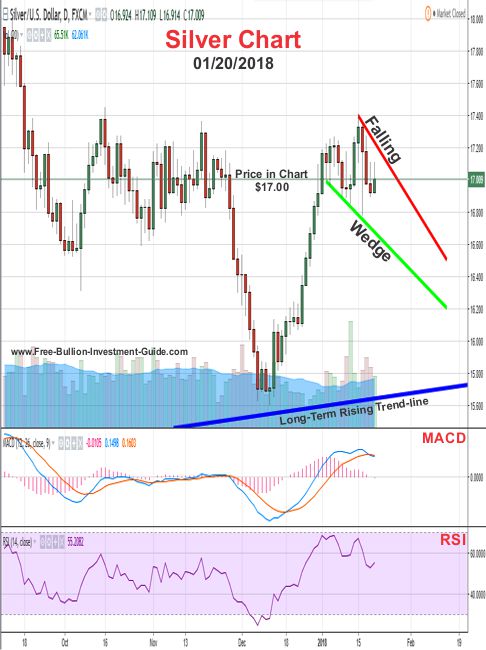 Like silver, now that the price of gold has moved up with a lot of momentum, some of that momentum is starting to wane.

In addition, like silver, gold has also formed a negative 'Rising Expanding Wedge' pattern that is narrow in shape.

The narrow shape of the 'Rising Expanding Wedge' pattern found in gold and silver's price charts gives the possible indication that the two precious metals may see a limited pull back; time will tell.

The other indication that shows gold is due for a pullback is gold's MACD bar chart, like the dollar and silver's MACD has indicated, gold's bar chart has also started to change directions.

Plus, gold's RSI is also peaking in overbought territory. 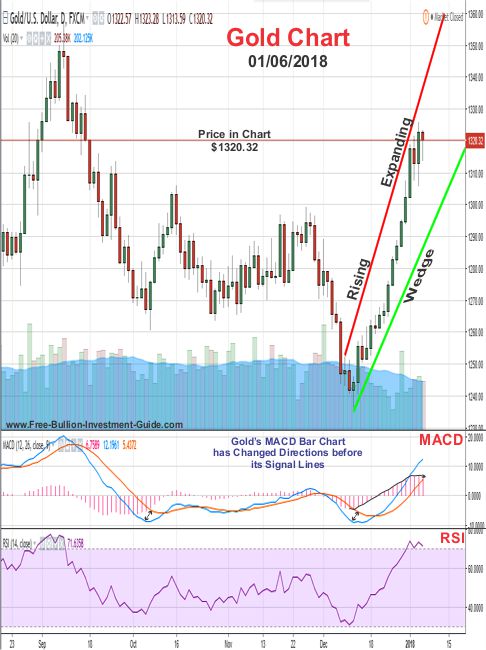 As seen in the chart below, the price of gold, like silver, did start to pullback in price, but after January 10th, it bounced back up in price.

Unlike silver, gold still has not broken below its negative 'Rising Expanding Wedge' pattern, which may have something to do with what's happening concerning the funding of the U.S. government.

So the price of gold may move up higher as traders move into it because it is a safe haven.

However, sometime in the near future, gold should follow silver and confirm its negative 'Rising Expanding Wedge' technical pattern. 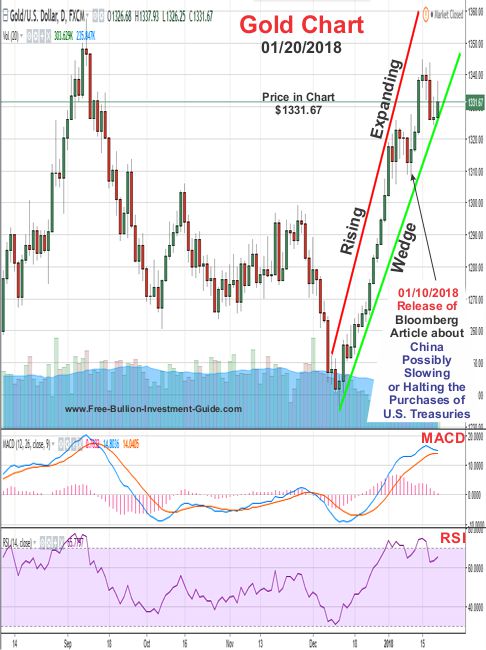 
Return from this Guide's