'Analysis' of the Markets latest movements,
and the U.S. Dollar, Silver, and Gold


I Was Asked: Why Did All this Money-Printing Not Trigger Massive Inflation? - Wolf Street


The Bigotry of the Literati - Mises Institute


5 Charts That Show Why Gold Belongs in Your Portfolio Now - U.S. Global Investors 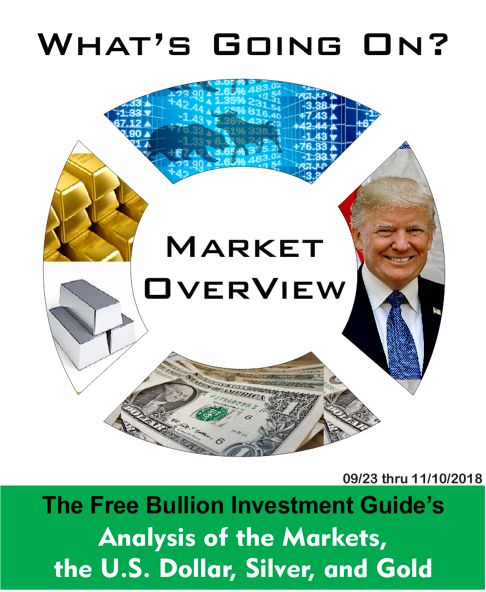 Normally, you'd find a review and outlook here for the US dollar, silver, and gold, but with the unknowns in the market, I thought I'd write an overview that will last till the U.S. Congressional election has passed.

About two years ago, I wrote a blog post titled: Trump's QE, it was mostly about how the stock market was spiking on Trump's words and promises, not on actions and it was about how the market could be peaking on just Trump's words.

However, two years later, President Trump has come through on his promises and expanded the economy by lowering corporate taxes and reducing regulations.

There are still issues with the economy, most notably: spending and debt, but I'm only reflecting on the what I wrote in Trump's QE, not dissecting the good and the bad in the market.

But, despite the good signs in the economy, in the news over the last few days, there's been a lot of talk about the sell-off in the stock markets.

Trouble lurks in the stock market, with one-third of S&P 500 trading in bear territory - USA Today

The arguments made in the articles above and others like them about a market down-turn don't hold much water, and here's why.

Two weeks ago, the Federal Reserve raised interest rates by a quarter of a percent, and if they raise interest rates again it won't come till mid-December, so it's foolish to say that the market is selling off now on the possibility of another rate hike, that's 2 months away.

Those in the financial news outlets are always talking about an 'Inverted Yield Curve' (definition: here) and how it's a good barometer for the next market crash.

Here's a snapshot of the current yield curve, does it look inverted to you? 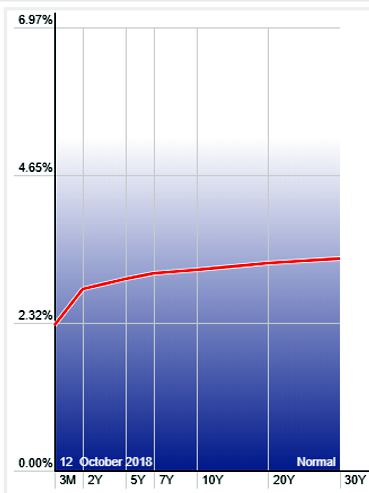 Let me be clear, I'm not saying it won't become inverted, I'm also not saying that a inverted curve isn't one of many warning signs of a market top, I'm just showing you that it isn't inverted now.

Plus, in many other market tops, the yield curve doesn't just invert once and then the market crashes, it inverts repeatedly and often before the market tops out.

The snapshot below of the 'inverted' yield curve is from November 2006, nearly two years before the market crash of 2008. 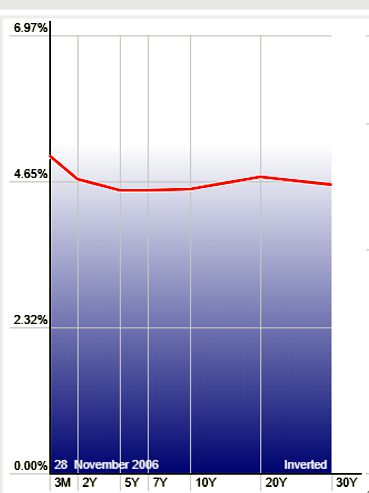 Let me show you some positive trend-lines in the DJIA - Dow Jones Industrial Avg, the rising trend-line in the first chart below dates back to the lows of the financial crisis lows in March of 2009.

Note: these same trend-lines can be drawn on the S&P 500, I simply decided to use the Dow Jones Industrial Avg. for these charts. 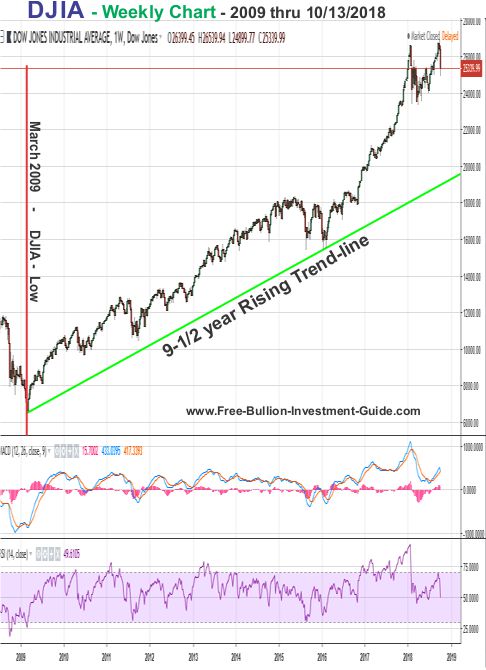 Clearly, we aren't anywhere near breaking this line in the future, and the DJIA would have to fall another 2000 points to come close to the next rising trend-line, in the chart below, that dates back to February of 2016. 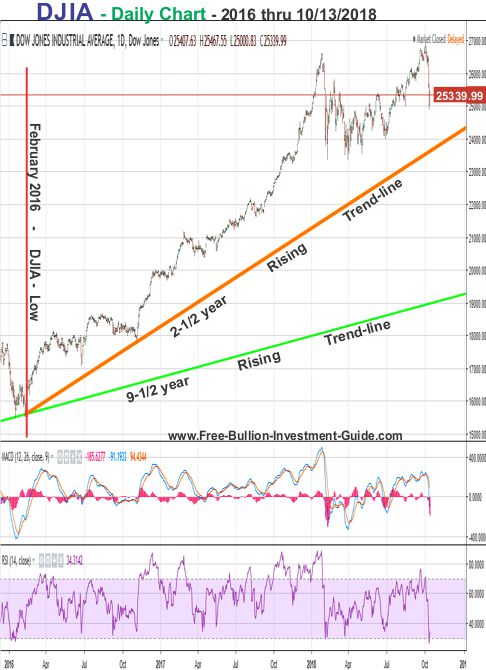 However, last Thursday, the DJIA dropped down to the next rising trend-line (below) that is directly correlated to President Trump.

This rising trend-line started on the day President Trump was elected into office, on Nov. 8th, 2016.

The pullback in the DowJones Industrial Avg., and other markets, on Thursday, fell to that trend-line and closed the day of trading on it, then, the next day, it bounced back above it. 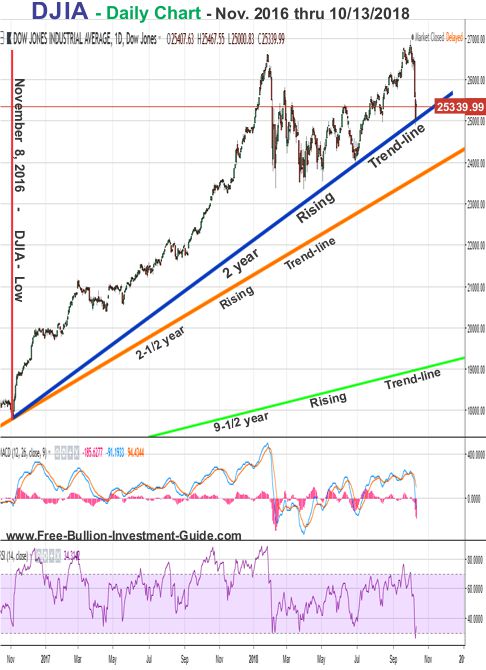 Here's a closer view of Friday's movement on the DJIA and its interaction with the 2-year Rising Trend-line that correlates to President Trump's election. 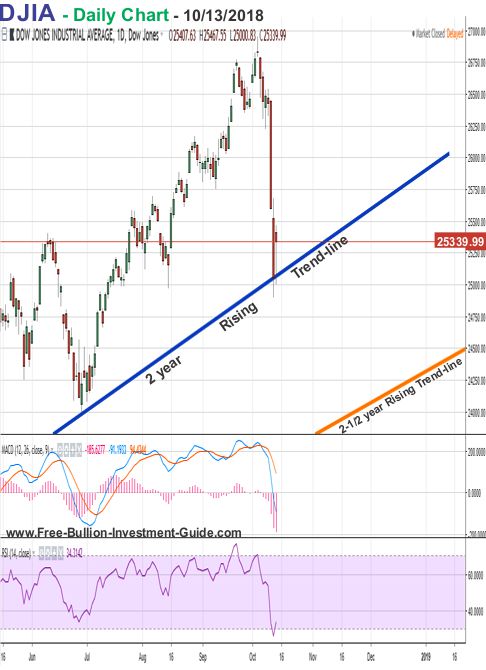 Time will tell if that happens.

But, if interest rates, yield curves, and technical factors in the broad market had nothing to do with the recent sell-off; What did cause it?

First of all, the stock markets had risen in price since July without a substantial pullback or consolidation, so one was bound to happen.

The other reason is 'Uncertainty' in the markets about the U.S. Congressional mid-term elections.

In case you've been living under a rock since President Trump's election, just about every democrat absolutely hates President Trump, especially those in Congress.

In addition, if the Democrats in Congress win the majority in the House of Representatives on election day 2018 (Nov. 6th) all we'll hear after that day is who the democrats are going to investigate and when they are going to try to start the impeachment process.

The Democrats hatred for President Trump has made them blind to the positives in the economy.

If they win the majority in the House of Representatives, it will likely create a lot more Uncertainty in the markets and this will most likely cause more sell-offs and a testing of the 2009 rising trend-line.

So, until the election, we will likely see more of this kind of 'Uncertainty' in the markets.

In the last outlook for the U.S. Dollar, the following commentary and outlook was posted:

In the U.S. Dollar's outlook chart below, a positive 'Falling Wedge' pattern has formed.

As seen here, the market is overwhelmingly expecting the Federal Reserve to raise interest rates another quarter of a percent (.25%) at its next meeting, later this week on Sept 25-26.

So, if the Federal Reserve raises rates, as it is expected to do, the positive 'Falling Wedge' pattern should be confirmed sometime in the near future. 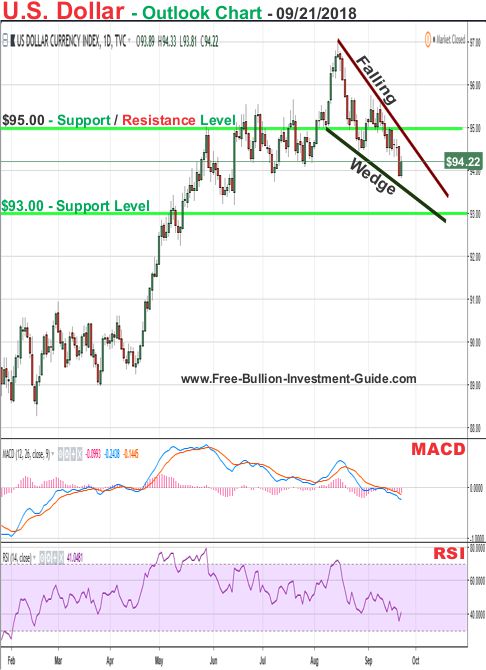 In the U.S. Dollar chart below, the dollar did what was stated in the last blog post: the positive 'Falling Wedge' pattern should be confirmed sometime in the near future.

The outlook for the dollar mostly depends on fundamentals and which way the election swings in three weeks.

Technical analysis is virtually useless until after the election.

If the Democrats take control of the House of Representatives it will likely cause the dollar to fall because economic expansion could be jeopardized.

However, if they don't win the 'House,' then we can expect to see the dollar rise higher.

Over the next three weeks, it's likely we'll see the dollar move sideways as it skirts along the $95.00 Support / Resistance level. 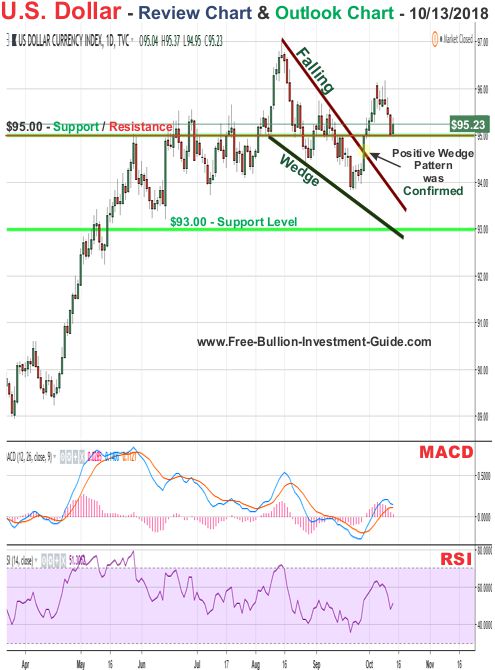 In the last blog post title; 'Gold and Silver are Forked,' the outlook below was posted for silver.


As you can see in the 1st Outlook chart below, silver has continued to fall in price, however, it also found a consolidation price level around the $14.20.

Below, is the first view of the 'Andrew's Pitchfork,' the 2nd Outlook chart (below) offers more information about this technical trading pattern. 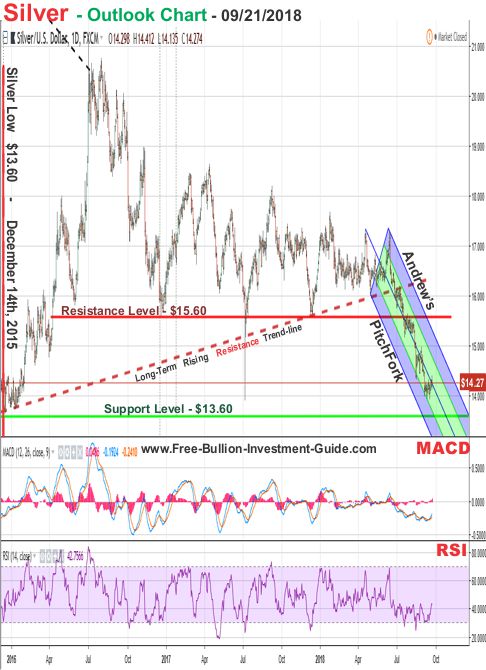 In the 2nd silver outlook chart, below, you can get a better view of the Andrew's Pitchfork.

Even though there are some technical factors that are involved in finding them, as mentioned in the intro in 'practical terms' an Andrew's Pitchfork is simply a glorified channel.

Furthermore, much like a channel, if the price of silver breaks below the support level, it will be a very bad sign for silver's future price, however, if/when it breaks above the upper trend-line, it will be the first sign that it has found a bottom.

See a full explanation of a Andrew's Pitchfork here.

The market is waiting to see what the Federal Reserve will do by the end of the week, I, like those in the market expect 'the Fed' to raise rates again and if that happens we should see silver test the nearly three-year-old support level of $13.60. (see chart above) 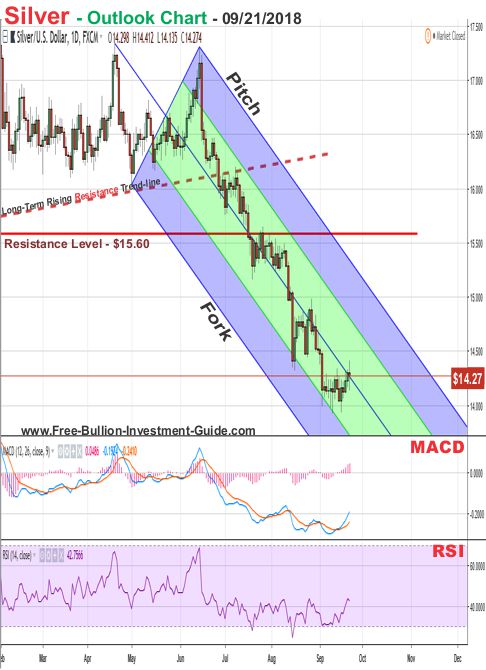 By looking at the 'review and outlook' chart below, the price of silver didn't fall in price and test the $13.60 level, as was stated in the last blog post.

Instead, it rose in price.


Silver's currently bouncing between $15.00 and $14.00, its trajectory is moving higher, but it is still trading inside the Pitchfork, which isn't good.

For silver's outlook, more of the same is expected until after the election sideways movement with an upward slant. 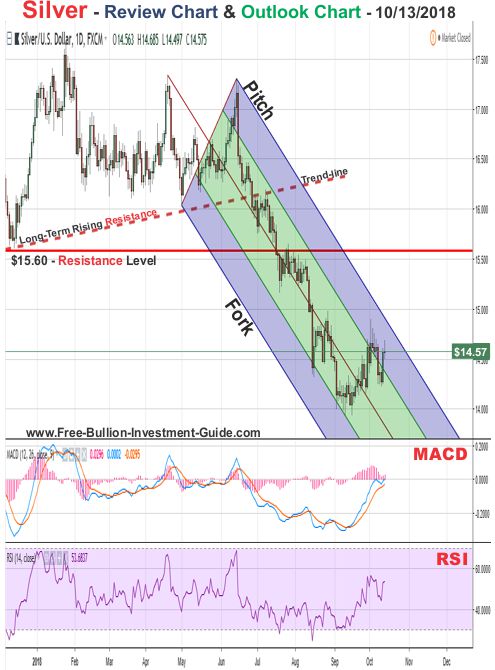 
In gold's outlook chart below, you can get a better view of how gold's price has consolidated at the $1,195 resistance/support price level.

In addition, just like silver, if the price of gold falls below the bottom blue shaded trend-line, it will be a very bad sign for gold's future price.

However, if/when it breaks above the upper blue shaded trend-line, then that will be the first sign that it is forming a bottom.

For now, the market is expecting the Federal Reserve to raise interest rates by 25 basis points (.25%), and if it does so, the price of gold is expected to continue to trade inside the Andrew's Pitchfork and move lower. 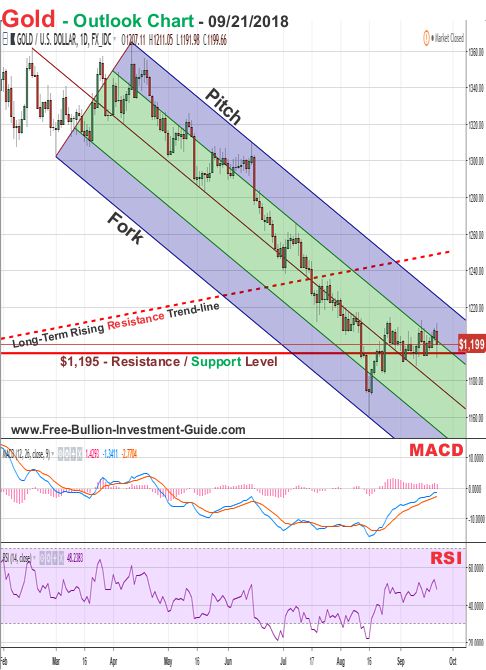 
Like silver, gold didn't move down after the Federal Reserve raised interest rates, instead if you compare outlook chart (above) with the review and outlook chart below, the price of gold moved along the $1195 support and resistance level before it broke above the pitchfork, near the end of last week.

Gold's break above the Pitchfork is a good sign, and it could be a sign that a bottom has been found, but, I'm not convinced yet until after the U.S. Congressional election.

For gold's outlook, I've tried to find a technical pattern in gold's chart, but there aren't any, fundamentals will drive gold's move over the next three weeks, which will likely move like silver; sideways with an upward slant. 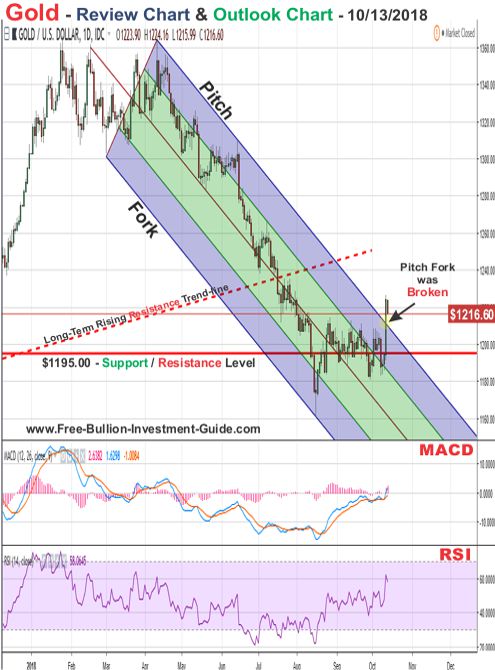