The research team uses Gold Nano-particles and the Kanzius Radio-wave machine to achieve results that only cause harm to the tumor and not the individual, unlike most other commonly used treatments for cancer.

Dr. Steven Curley, is a Professor and the Chief of Surgical Oncology and the head of the Kanzius Gold Nano-Particle / Radiowave Cancer Research at the Baylor College of Medicine, in Houston, TX.

Gold Nanoparticles Stablilized with MPEG-Grafted Poly(L-lysine): in Vitro and in Vivo Evaluation of a Potential Theranostic Agent

The latest study released by Dr. Steven Curley and his research team studied how to modify the surface of a gold nano particle without lowering its surface energy.

In several past studies, using Gold Nano-Particles, by different research groups, it has been observed that different coatings of the gold nano-particles have reduced its effectiveness. 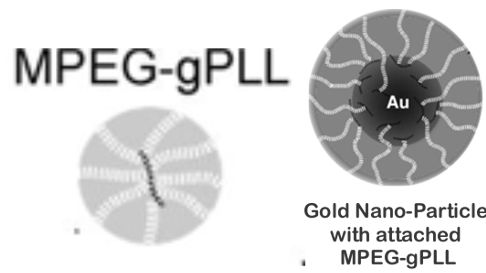 L-lysine is one of the 22 amino acids, it is an essential amino acid for humans to live. (its a protein)

They attached the MPEG-gPLL to Gold Nano-Particles as seen in the graphic, above.

L-lysine Nutritional Fact: L-lysine increases the intestinal absorption of calcium and eliminates its excretion by the kidney, suggesting that it might be helpful in osteoporosis. L-lysine can be found in meats, dairy products, eggs, grains, seeds, beans and nuts.

In the 'in vitro' (in glass or culture medium) the MPEG-gPLL-stabilized Gold Nano-Particles exhibited a high uptake and very low toxicity levels in normal human endothelial cells. 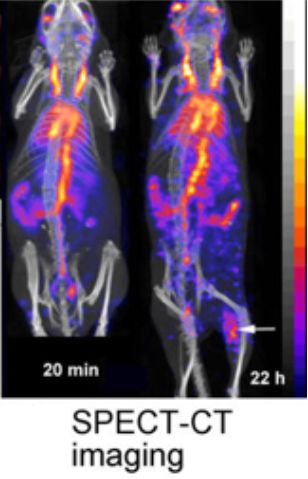 In the 'in-vivo' (in body) experiment, they injected a mouse with the MPEG-gPLL Gold Nano-Particles. (shown in the photo to the right)

In the right femur of the mouse is a cancerous tumor, after a 22h period, as shown by the arrow in the photo, the gold nano-particles show they have collected in the tumor.

The research showed that with localized Radio-wave therapy, that the L-lysine proved to be a good biological stabilizing coating for Gold Nano-Particle cancer research.

In addition, L-lysine did not hinder the Gold Nano-Particle/Radio-wave therapy when the localized segment of inflammation was placed in a radio wave field.

In the conclusion of the research the team noted:

"We conclude that PEG-pPLL coating of AuNPs confers "stealth" properties that enable these particles to exist in vivo in a non-aggregating, bio-compatible state making them suitable for potential use in biomedical applications such as noninvasive radio-frequency cancer therapy."

The previous paragraphs are a summary of the Gold Nano-Particle / Radio-wave Research that is in relation to the missions of the guide, the link below takes you to a link to the full pdf research file.

Research Link: Gold Nanoparticles Stablilized with MPEG-Grafted Poly(L-lysine): in Vitro and in Vivo Evaluation of a Potential Theranostic Agent


Return from the Cancer Research Update2 page and