For the last seven years, this website has been informing people about the many ways gold nanoparticles offer a better way to treat cancer than today's methods.

The Free Bullion Investment Guide is a little unusual to other guides because it is not only is for individuals interested in physical precious metals bullion.

This guide also advocates for Gold Nanoparticle Cancer Research, and it gives to individuals who are battling cancer through donations to the Angel of Healing Cancer Fund.

Gold Nanoparticles in Cancer Research is designed to kill cancer cells without harming healthy tissues, therefore it does not have harmful side-effects.

In this report, you'll find summaries of the most promising and compelling studies from the past two months in regards to gold nanoparticle cancer research, with each summary you'll find direct links to the original articles and/or research reports.

Pancreatic Ductal Adenocarcinoma (PDAC) is the most common form of Pancreatic Cancer, it's also extremely aggressive and difficult to treat.

Despite medicine's knowledge of the PDAC tumor biology, the prognosis of this form of cancer remains poor, 80-90% of patients with the disease are usually surgically incurable because it is often found during later stages of growth.

Furthermore, currently, the most promising chance for survival of this cancer is the complete surgical removal of the tumor.

Pancreatic Ductal Adenocarcinoma (PDAC) tumors defend themselves against its host by creating a fibrous tissue that restricts blood flow, which helps it to spread to other areas of the body.

The traditional chemotherapy for Pancreatic Cancer is a drug called Gemcitabine, but due to the defenses of PDAC, this drug often barely makes a dent in killing the cancer cells.

That is why researchers at the University of Chinese Academy of Sciences, in Beijing, China, have designed a new way of attacking Pancreatic Cancer (PDAC).

The first graphic below shows how the researchers constructed the multi-layered gold nanoparticles.

From left to right, the gold nanoparticle is first coated with an acid (MUA) and two polymers (mPEG-d-PEI) that help to make the nanoparticles more stable in liquid.

Next, a non-chemotherapy drug called All-Trans-Retinoic Acid (ATRA) is added to the nanoparticle to 're-educate' the nucleus of the cancer cell to make it stop the production of its fibrous defenses.

The last stage of the gold nanoparticle-based system consisted of adding a protein called 'HSP47' (Heat-Shock Protein 47) and siRNA (small interfering RNA) these two molecules were added to help break-up the cancer cell's defenses so that blood-flow and drug absorption could be restored.

Assembly of the gold nanoparticle based system

After the gold nanoparticles entered the bloodstream and found the targeted cancer cells, they were absorbed by the cancer cell through Endocytosis.

Once the multi-layered, gold nanoparticles were inside the cancer cell, the research was carried out in two phases.

First, the high PH-levels (acidic) found inside a cancer cell deteriorated the gold-based nanoparticles, which in turn released the ATRA, HSP47, and siRNA.

The ATRA moved to the nucleus which is also known as the brain of a cell, and started to re-educate the cell to make it stop creating the fibrous defenses that restricts blood flow to the pancreas.

As the ATRA re-educates the cell, HSP47 and siRNA move to destroy the remaining fibrous tissues in and around the pancreas. 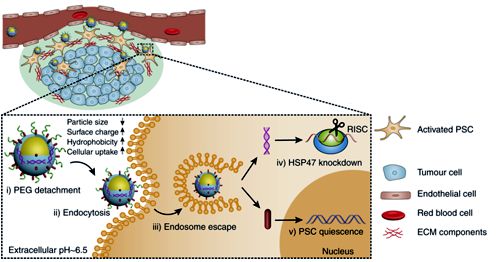 Phase 1 of the research, stopped the Pancreatic Stellate Cells (PSCs) from producing the fibrous tissues, and most of the remaining restrictive tissues have been destroyed, which restored blood flow.

Phase 2 of the research starts, after the Pancreatic Ductal AdenoCarcinoma (PDAC) Cells, are ‘Re-Educated,’ and Bloodflow returns to the Pancreas.


Ultimately, the research found that the gold-based, multi-layered nanoparticles were successful in suppressing Pancreatic Cancer Cells (PDAC), which allowed Gemcitobine to be more effective in reducing the size of pancreatic tumors in the living specimens.

One of the ingredients that cancer cells use to metastasize, and spread into the body, is called 'Actin Filament.'

Actin Filaments are an essential cytoskeletal cellular tissue that helps our cells move.

Unfortunately, cancer cells use Actin Filaments against us by using them against us to spread in the body.

Cancer cells move together to metastasize, but it requires the contraction of Actin Filaments and the neighboring cells junction proteins.

In this next study from Georgia Tech, a group of researchers experimented with Gold NanoRods to try to stop cancer cells from using Actin Filaments, and cell junction proteins from helping cancer to metastasize.

The first graphic below shows the collective migration of cancer cells as they are attached and move together by cellular proteins and Actin Filaments.

The next graphic below illustrates how gold nanorods and near-infrared light inhibited the cancer cell migration by disrupting the functions of the Actin Filaments and cell junction proteins.

The researchers stated the following about the research:

This last study is about how scientist designed a new gold nanostar.

This research study comes to us from the University of Science and Technology in Wuhan, China, where scientists have created a near-infrared, light-triggered, gold nanostar.

The diagram below shows you how the scientists designed the new nanoparticle.

In the first stage of development, researchers attached a molecule called CB[7] to the gold nanostar.

CB[7] is added to the nanoparticle to help stabilize the nanostar when it is in liquid, plus CB[7] will encapsulate a naturally derived anti-cancer drug called Camptothecin (CPT).

Camptothecin (CPT) is derived from a native tree, in China, called Camptotheca or 'Happy Tree,' it's been used in traditional Chinese Medicine, as an anti-cancer agent, since 1966. 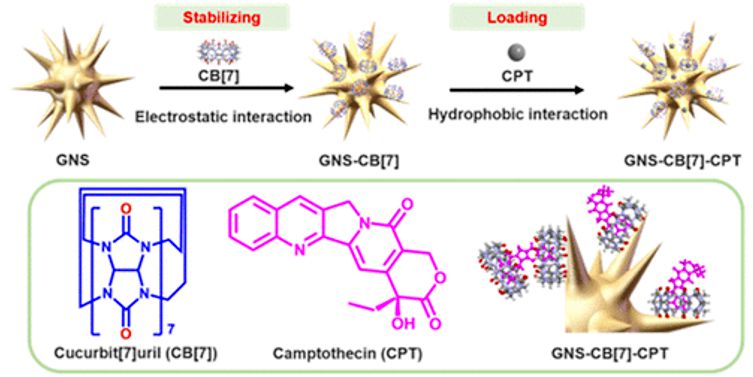 Expectations are that once the gold nanostars are inside a cancer cell, the 'near-infrared light' (NIR) will be focused on the loaded CB[7]-CPT Gold NanoStars causing the nanostars to heat up, which will release the drug, and kill cancer.


See an overview about the Gold NanoStars here: Near Infrared Light Triggered Cucurbit[7]uril-Stabilized Gold Nanostars as a Supramolecular Nanoplatform for Combination Treatment of Cancer - ACS Publications