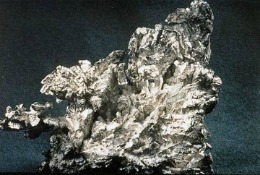 Silver is a metallic chemical element with the chemical symbol Ag, its atomic number is 47. Its symbol comes from the Latin word "Argentum", from the Indo-European root arg- for "grey" or "shining."

Silver occurs naturally in its pure, free form, as an alloy with gold and other metals and in minerals such as argentite and chlorargyrite.  Most silver is mined as a byproduct of copper, gold, lead, and zinc refining.

Silver has long been valued as a precious metal, and it is used to make ornaments, jewelry, high-value tableware, utensils (silverware), currency coins and investment-grade bullion.

Today, silver is also used in electrical contacts and conductors, in batteries, in the manufacturing of solar panels and in catalysis of chemical reactions.

A Few Facts about Silver Mining:

Silver ore is frequently found as a by-product in gold, lead, zinc, and copper deposits. 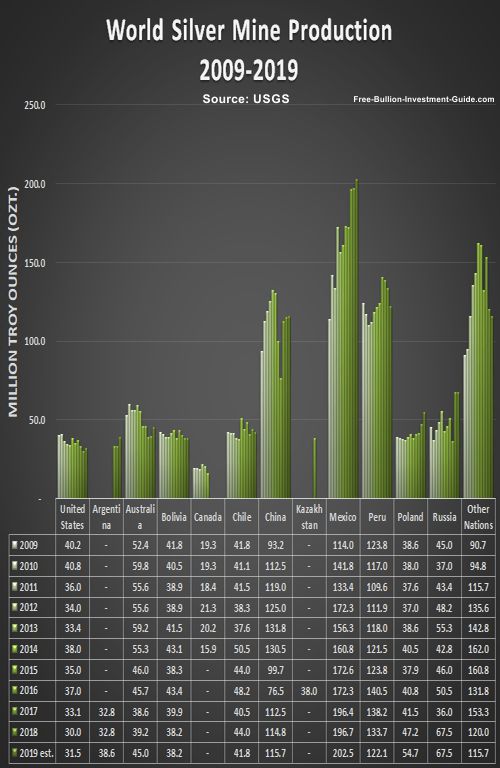 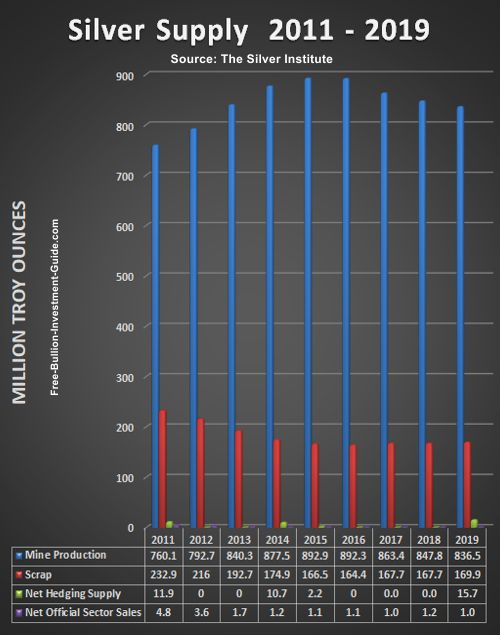 Scrap, or more properly “old scrap,” is the silver that returns to the market when recovered from manufactured goods. This includes old jewelry, photographic chemicals, and other industrial uses.

However, it excludes silver that is returned untransformed by the manufacturing process or it never becomes an end product or so-called “process scrap”.

Producer hedging is the early sale of silver ore by mining companies of future production.  Hedging may also not appear every year on the supply side on a net basis as it can form part of demand as de-hedging.

Disinvestment and government sales are similar in that both comprise the return to the market of old bars and coins by the private sector and governments. It is worth bearing in mind that these sources may not add to supply every year on a net basis. 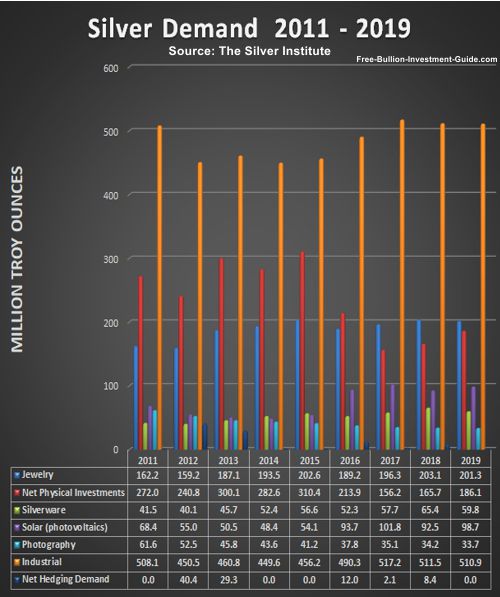 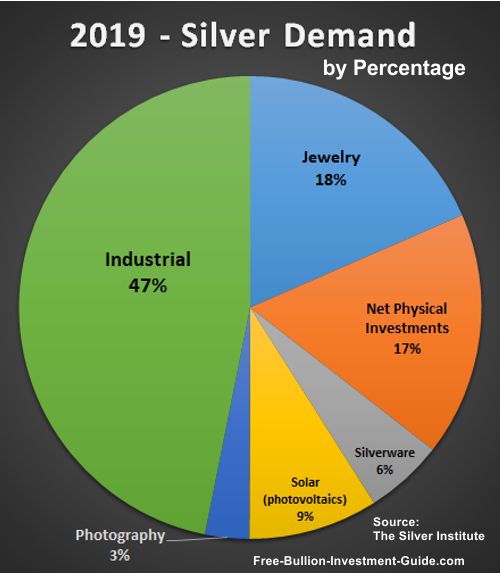 Silver jewelry is highly prized for its brilliant luster and its ease of fabrication. Pure silver, also known as 999 fineness, is tarnish resistant, but it is too soft for use in jewelry.

Silversmiths often alloy it with other metals, such as copper, to harden it. Sterling silver, for example, is 92.5 percent silver and 7.5 percent copper. Sterling silver is a standard in many countries for silver jewelry.

The same properties that make silver ideal for jewelry also cross over into silverware with its reflectiveness and tarnish resistance. Copper is mixed with silver to toughen it for use as cutlery, bowls and decorative items such as picture frames.

Silver based photography is caused by light striking sensitive silver halide crystals suspended on a film. Through the use of a chemical process, the differences in light intensity form negative images which can then be processed into paper pictures by using silver embedded paper.

Approximately 5,000 color photographs can be taken using one ounce of silver. The growth of digital photography has caused the use of silver-based imaging by consumers to drop over the past decade.

Nevertheless, because of its extreme accuracy and cost effectiveness, silver-halide films are still chosen for some applications.

For example, medical X-Ray technicians, especially those in developing countries, prefer silver-based pictures because of their low cost and high accuracy.

Many batteries, rechargeable and disposable, are manufactured with silver alloys as the cathode or negative side.

Although expensive, silver cells have a power-to-weight characteristics superior to their competitors. The most common of these batteries is the small button shaped silver oxide cell - used in cameras, toys, hearing aids, watches and calculators.

Due to environmental and safety concerns, silver-oxide batteries are beginning to replace lithium-ion batteries in mobile phones and laptop computers. Silver-zinc batteries feature a water based chemistry and contain no lithium or flammable liquids.

Steel ball bearings that are electroplated with silver have greater fatigue strength and load carrying capacity than any other type.

These bearings are used in continuous, heavy-duty applications such as in jet engines. Because steel has poor friction properties, placing a layer of silver between the steel ball bearing and the housing reduces friction, increasing the performance and reliability of the engine.

Silver facilitates the joining of materials, called brazing when done at temperatures above 600 degrees Celsius and soldering when below and produces naturally smooth, leak-tight and corrosion-resistant joints.

Silver brazing alloys are used widely in applications ranging from air-conditioning and refrigeration to electric power distribution. It is also used in the automobile and aerospace industries.

Silver brazes and solders combine high tensile strength, ductility and thermal conductivity. Silver-tin solders are used for bonding copper pipe in homes, where they not only eliminate the use of harmful lead-based solders, but also provide the piping with silver’s natural antibacterial action.

Due to health concerns, the traditional 63 percent tin/37 percent lead solder used to build electronic equipment is quickly being replaced by a combination of silver, tin and copper solder.

The movement was boosted by the Restriction of Hazardous Substances (RoHS) legislation that applies throughout the European Union (EU). The law bans all products containing more than a trace amount of lead, mercury, cadmium and several other hazardous substances.

Although the laws apply only to EU countries, it is being felt worldwide as companies move to a safer solder.

Silver catalysts produce formaldehyde which is used to manufacture plywood for building construction.

A catalyst is a substance that facilitates a chemical process without itself undergoing any transformation, because of its unique chemical properties, silver is an important catalyst in the production of two major industrial chemicals.

More than 150 million ounces of silver annually are used in the world's chemical industry for the production of two compounds – ethylene oxide and formaldehyde, both are essential to the plastics industry.

Ethylene oxide is the foundation for flexible plastics such as polyester textiles, used to make all types of clothing. It is also used for molded items such as insulating handles for stoves, key tops for computers, electrical control knobs, domestic appliance components, and electrical connector housings.

About 25 percent of ethylene oxide production is used to produce antifreeze coolant for automobiles and other vehicles.

Formaldehyde, a chemical produced from methanol, is the building block of solid plastics including adhesives, laminating resins for construction plywood and particle board.

Because of its resistance to pitting and tarnish, silver is used to coat CDs and DVDs.

Silver has excellent electrical conductivity, it is used in many applications in electronics from printed circuit boards to switches and TV screens.

Silver membrane switches, which require only a light touch, are used in buttons on televisions, telephones, microwave ovens, toys and computer keyboards. These switches are highly reliable and last for millions of on/off cycles.

Silver based inks and films are used for printed circuit boards, used in consumer items from mobile phones to computers, to composite boards to create electrical pathways.

Silver’s anti-bacterial powers have been tested and proven scientifically even though its power as a bactericide has been known for centuries. The ancient Phoenicians, for example, knew that water, wine or vinegar kept in silver vessels stayed fresh during long sea voyages.

However, only recently have scientists discovered how silver does its work. Silver interrupts a bacteria cell’s ability to form chemical bonds essential to its survival. These bonds produce the cell’s physical structure so bacteria in the presence of silver literally falls apart.

Cells in humans and other animals have thick walls and are not disturbed by silver. Therefore, silver prevents bacteria growth but is harmless to humans.

One of the most important uses of silver as a biocide is in hospitals and other health care facilities because they grapple with MRSA (Methicillin-resistant Staphylococcus aureus), a type of life-threatening Staph germ. Also known as a ‘superbug,’ MRSA is resistant to almost all chemical antibiotics, so many hospitals are employing silver-embedded equipment including surgical tools, catheters, needles, stethoscopes, furniture, door handles and even paper files.

One of the most promising applications is in silver embedded bandages for burn and wound victims. The silver ions help prevent infection but also speed healing because the body doesn’t have to focus its energy on fighting infection.

Currently their is a surge of applications for silver-based biocides in all areas: industrial, commercial and consumer. The newest trend is the use of nano-silver particles to deliver silver ions.

When polished, silver offers nearly perfect reflectivity which makes it ideal for energy-efficient windows. While silver coated mirrors have been around for hundreds of years. The coatings are extremely thin, almost transparent coating of silver on window panes not only reflects the heat of the sun, but deflects inward the room’s own internal heat.

Over 250 million square feet of silver coated glass is used for domestic windows in the U.S. annually and much more is employed for silver coated polyester sheet for retrofitting windows.

In addition, one of every seven pairs of prescription eyeglasses sold in the US incorporates silver. Silver halide crystals melted into the glass can change light transmission from 96% to 22% in less than 60 seconds and block at least 97% of the sun's ultraviolet rays.

These lenses are very popular as they allow people to move from indoor to outdoor activity and back again without the need to change eyeglasses.

Another increasing use of silver is in paints. Silver ions offer an anti-bacterial shield that keeps the coating germ and fungus free. This is particularly important in health care facilities, jails, schools, food and beverage factories and other places in which bacteria growth can be a health hazard.

Silver paste is used in 90 percent of all crystalline silicon photovoltaic cells, which are the most common type of solar cell. Photovoltaic systems are simple and provide immediately useful power with no pollution.

Silver is used in another way to generate electricity by reflecting and concentrating solar energy onto collector tubes containing salts which are used to run generators.

This heats the tubes and the nitrate salt inside them to over 1050 degrees F. The scalding hot salt is then piped to boilers, turning water to steam which drives steam turbines that run electric generators. They generate electricity to power 10,000 homes.

The major benefit in having silver-ion filter is that replaces traditional germ-killing methods that employ harsh, sometimes dangerous chemicals such as chlorine and bromine.

The silver ion filter is also finding its way into personal water purification devices that are small, short tubes inserted into suspect water.  With several different methods of water purification in this tube, often including a charcoal filter, silver’s role is to prevent the growth of bacteria and fungi that could overwhelm the system and render it useless.

Purified water is becoming a scarcer commodity than gold in some aspects which is making the silver ion filter a much needed asset in the developed and emerging markets.

Click the Links below to go to the Silver Price Charts page which offers you the following: