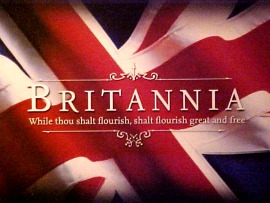 The Silver Britannia was first released in 1997, as a collector's silver proof set.  The Silver Bullion Coin Series was started in 1998.

The bullion coin has a proof-like finish, just like the Australian Kookaburra, Koala and the Austrian Philharmonic silver bullion coins. 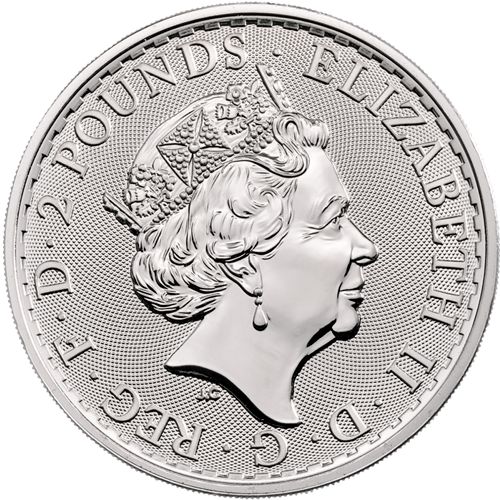 Featured on the obverse side of the 1 oz. UK Britannia Silver bullion coin is the current portrait of Queen Elizabeth II.

Jody Clark designed the effigy of the Queen, his initials "JC" are inscribed directly below the Queen's neck.

Inscribed, inside the crenellated border of the coin, are the words and letters "ELIZABETH II, D,G, REG, FID, DEF".

D, G, REG, stands for "Dei Gratia Regina," it is a Latin title meaning "By the Grace of God, Queen."

F, D, stands for "Fidei Defensor," it also is a Latin title that translates into "Defender of the Faith" in English.

The phrases have been used regularly on coinage since the 16th century.

The Face Value of the Britannia Silver coin is "2 POUNDS."

Issued as legal tender, the Silver Britannia bullion coin is guaranteed by the Government of the United Kingdom. 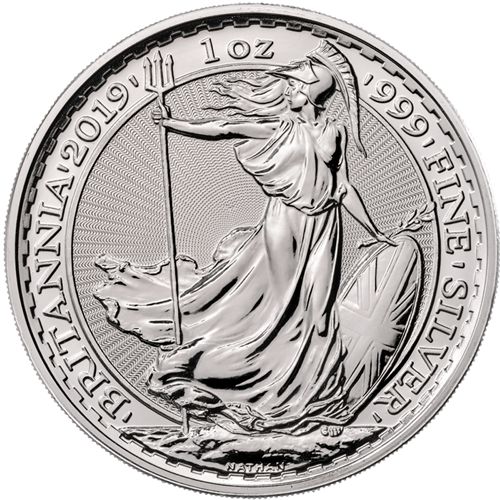 The design on the UK Britannia Silver Bullion Coin was taken from Philip Nathan's original design of Britannia standing.

The Designer's last name of "NATHAN" is inscribed directly below Britannia's portrait.

Britannia's Portrait and Image is a Symbol of National Pride for the United Kingdom.


"Britannia" is viewed as a beautiful young woman with flowing golden hair, a Corinthian helmet and she is dressed in white robes.

She's often depicted as holding a three-pronged trident in one hand and standing near or holding a shield with the British Union Jack Flag on it.

The Name of the bullion coin "BRITANNIA" and the silver coins Year of Issue "2019" are inscribed inside the coin's notched crenelated border.

Also inscribed inside the coin's border is the silver bullion coins Weight of "1 oz" and Purity "999 FINE SILVER."

The Edge on the silver bullion coins are Reeded.

The History of "Britannia"


"Britannia" is the Ancient Latin Name for Great Britain

Great Britain was known as "Britannia" as early as the 1st century to after the Roman Empire and has been seen in 9th and 12th-century titles. 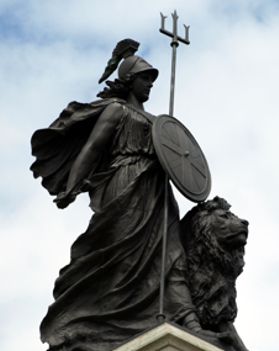 "Britannia" is a young woman with flowing, brown or golden hair, a Corinthian helmet and dressed in white robes.

Up until 2008, the lion symbol was depicted behind Britannia on the British fifty pence coin and on the back of the British ten pence coin.


Where You Can
Buy
Silver Britannia Bullion Coins