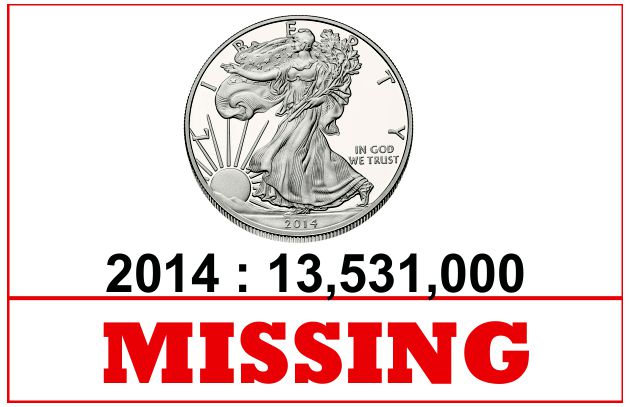 This afternoon, I was going over this Coin World article to update the mintage figures on my American Silver Eagle page so that they would better reflect the new information found in the article.

Which is that not all American Silver Eagle Bullion Coins are minted at the West Point, NY. Mint.

The article was released on March 31st., and it's titled: 'Millions of American Eagle silver bullion coins struck at San Francisco, Philadelphia Mints.'

As I cross referenced the totals of the released U.S. Treasury numbers in the Coin World article and the U.S. Mint's official numbers, I quickly realized the numbers for 2014 weren’t adding up.

See the numbers below:


After quickly running the numbers and realizing the issue, I emailed the William T. Gibbs, the Managing Editor of Coin World, three hours ago about the issue, here is a copy of my email;

I don't know if you know this, but your numbers in this article for 2014's ASE mintage is wrong somewhere.

However, in your article referenced in the title, (link: http://www.coinworld.com/news/precious-metals/2017/03/millions-of-silver-eagles-struck-outside-west-point-mint.html) the total number of American Silver Eagle Bullion Coins minted in 2014 only add up to 30,475,000

I was going to wait for Coin World’s response before I wrote this blog post, but I doubt they have an answer to the question in my email.

Clearly, something isn't right and one set of numbers is wrong.

Question is: Which one?


Thank you for your time & God Bless,