Gold-Nano Blog / Q and A with a Pioneer in Medical Science Naomi J. Halas Ph.D

Q and A
with a Pioneer in Medical Science
Naomi J. Halas Ph.D 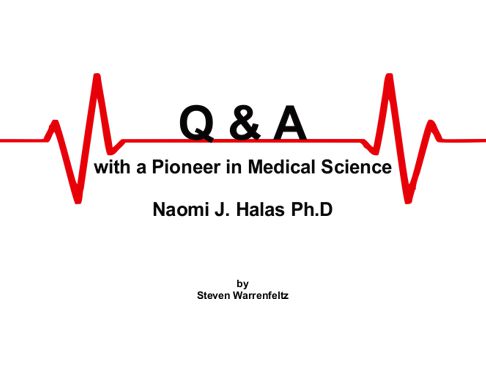 Pioneers are known for being the first in forging a new path to help others have a better life.

Last week, I had the opportunity to ask Dr. Naomi J. Halas, who is a pioneer in the field of nanoscience and medicine, some questions about her work in gold nanoparticle cancer research.

In my original offer to ask her some questions, I mentioned that I would either call her or email the questions, I was dealing with the remnants of a cold, so I decided to email her, but I had hoped to call her because she is a lovely woman.

Dr. Halas is a Professor of Biomedical Engineering, Chemistry, Physics & Astronomy, and the founding Director of the Laboratory for Nanophotonics at Rice University in Houston, Texas.

She is one of the pioneering researchers in the field of plasmonics, creating the concept of the “tunable plasmon” by using the Surface Plasmon Resonance of gold nanoparticles.

Dr. Halas invented a family of nanoparticles with resonances spanning the visible and infrared regions of the spectrum.

She received her Ph.D from Bryn Mawr College, and is the author of over 300 publications, she has presented more than 500 invited talks (see one here on 'Plasmonics'), and her work has been cited more than 40,000 times.

Naomi's research group is also one of the recipients of the Angel of Healing Cancer Research Fund which donates money to those who do Gold Nanoparticle Cancer Research.

Below you'll find the Q & A, in this blog post I've added a follow-up to supply you with some additional information about Dr. Halas's answers.


Q: In your perspective, how much of the medical/oncology community recognizes Gold Nanoparticle Cancer Research as a viable alternative to chemotherapy? or As a better way to administer chemotherapy?

A: The medical community does not yet view gold nanoparticle based photothermal therapy as a viable alternative to chemo.  This will change as clinical trials progress and are successful (more on that in a moment!)

Follow Up: There's not much to add to this answer, that's so true, I honestly wanted to know what her thoughts were about the issue so I could share them with you (the reader).

Q: Cytotoxicity - In some studies that I've read about using gold nanoparticles in the human body, the researchers often claim that Gold Nanoparticles have their benefits, but they could be also toxic to the body.  (link: https://bit.ly/2PnrkuF)  I've been asked, from others, about what happens to the gold nanoparticles after the treatment is over, I usually tell them that gold is inert in both it's physical and nano-forms, and that toxicity is not an issue.  I often find the subject minute when its compared to traditional chemotherapy treatments, however:  What would be your response if someone asked you about gold's toxicity to the body in your research?

A: Cytotoxicity for gold nanoshells has been studied extensively, and Nanospectra (the company we formed to pursue clinical trials) has published data on that topic. In the extensive toxicity trials they saw no evidence whatsoever for toxicity.

Follow up: Below are links to two of the studies that Dr. Halas was referring to in her answer. (Note: 'AuroShells®' are a new class of nanoparticles developed by Nanospectra Biosciences, a company Naomi co-founded)

Initial Evaluation of the Safety of Nanoshell-Directed Photothermal Therapy in the Treatment of Prostate Disease.

A: The clinical trial by Dr. Art Rastinehad is with our nanoparticles!  This is a joint project between Nanospectra and Dr. Rastinehad, and has been so successful that it is expanding to other sites, which include the U. Michigan and UT Health Sciences Center in Houston.  There have been about 30 people treated thus far for prostate cancer and the results are absolutely outstanding.  No side effects from the treatment at all, other than increased urination (which is the DESIRABLE side effect!).  This is highly promising: the most enthusiastic proponents of this work are the doctors themselves, and now the patients as well.

Follow up:  Below is a video from a CBS 2News, in New York City, that introduces you to Dr. Rastinehad's clinical trial, his first patient, and his first patent's results after one year.

Furthermore, like Dr. Halas stated in her answer, the research has expanded to Michigan and Houston, Texas.


Before, we move onto the last question in this Q and A, 'click here' for a link to help you learn a more about this Clinical Trial.

A: Our research is going very well.  Because the photothermal cancer therapy is in the clinic now, we are looking at new problems.  One is to design nanoparticles that allow for the tracking of gene-edited cells after they are inserted into the body, and we have a collaborator focused on gene-edited cells.  We are very optimistic about our ability to enable this new type of medical treatment based on CRISPR-Cas9 gene editing to be viable in the clinic.

Follow up:  There is a lot of promise in using gold with CRISPR-Cas9 the following is from a report I wrote in the 1st Gold Nanoparticle Cancer Research News Report.

Dr. Francis S. Collins noted the following about using CRISPR-Gold to deliver CRISPR-Cas9 to help those suffering from Duchenne muscular dystrophy or DMD:

The CRISPR-Gold system—which consists of a DNA-linked gold nanoparticle containing Cas9, guide RNA, and a DNA repair template—is designed to enter cells through endocytosis, a process in which the cell engulfs outside molecules. A special polymer that encases the CRISPR-Gold system helps to ensure the gene-editing tools reach the cell’s genome in an active state.

In a series of tests, the researchers showed that CRISPR-Gold could enter a variety of cell types in laboratory culture, including immune cells, muscle cell progenitors, human induced pluripotent stem cells, and human embryonic stem cells. Once inside the cells, CRISPR-Gold could successfully find and edit a target gene in a non-toxic manner. Similar success occurred when CRISPR-Gold was injected into the muscles of living lab mice.

The next big challenge was to test CRISPR-Gold’s potential in a model of human disease. So, researchers turned to a mouse model of Duchenne muscular dystrophy (DMD), a fatal disorder characterized by progressive muscle weakening and caused by a mutation in the gene that codes for the protein dystrophin. They injected CRISPR-Gold containing a template for a healthy dystrophin gene into the leg muscles of young DMD mice. At the same time, they injected a toxin intended to encourage muscle cells to multiply because, for CRISPR editing to work optimally, cells must be actively dividing.

The outcome was encouraging. After one injection of CRISPR-Gold, about 5 percent of the dystrophin genes in the muscle tissue of the DMD mice had been corrected. What’s more, the animal’s muscles produced functional dystrophin protein, and they performed better on tests of muscle strength.

There was also good news on the safety front. The DMD mice didn’t appear to have a strong immune reaction to the treatment. The researchers also didn’t find evidence that CRISPR-Gold caused much, if any, unintended “off target” damage to the animals’ DNA.

Taken together, the findings suggest that, pending further replication, optimization, and careful testing, CRISPR-Gold might have promise for treating humans with DMD.

Lastly, I have no doubt that Dr. Naomi Halas and her team will find the answers to make their research into a better way to treat cancer because that is what pioneers do, they forge new paths to help others live better.

Thank you for your time,


Q and A
with a Pioneer in Medical Science