Investment Guru - Jim Rogers, is an American Commodities Investor and Author and a free market capitalist.

Jim Rogers has said that if he were to be labeled, the Austrian School of economics best supports his views.

In an Interview conducted with Jim Rogers, in 2009, he was asked "Where should people put their money?"

"Invest only in the things you know something about.  The mistake most people make is that they listen to hot tips, or act on something they read in a magazine."

"Most people know a lot about something, so they should just stick to what they know and buy an investment in that area.  That is how you get rich.  You don't get rich investing in things you know nothing about."

James Beeland Rogers, Jr. was born in Baltimore, Md. on October 19th, 1942 and was raised in Alabama.

At the age of five he started in business by collecting empty soda bottles at the local baseball field.

Roger's holds a bachelor's degree from Yale Univ. in History.

After graduating from Yale University in 1964, he won a scholarship to Balliol College, Oxford.

He also holds a bachelor's degree in Philosophy, Politics and Economics from University of Oxford.

Jim Rogers is the chairman of Rogers Holdings and Beeland Interests, Inc.

In 1998, Jim Rogers founded the Rogers International Commodity Index (RICI) and he is an outspoken advocate for agriculture investments.

In addition to the Rogers Commodity Index, Rogers is involved with two direct, farmland investment funds - Agrifirma, based in Brazil, and Agcapita Farmland Investment Partnership, based in Canada.

In February 2011, Jim Rogers started a new index fund which focuses on the top companies in agriculture, mining, metals and energy sectors as well as those in the alternative energy space including solar, wind and hydro.

The index is called The Rogers Global Resources Equity Index.

In 2010, at Oxford University’s Balliol College, he urged students to scrap career plans for Wall Street or London’s financial district, and to study agriculture and mining instead. 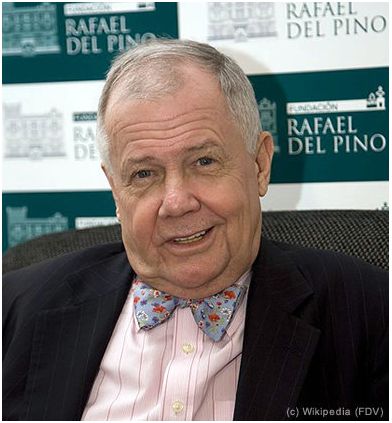 "The power is shifting again from the financial centers to the producers of real goods.  The place to be is in commodities, raw materials and natural resources..."

".....Don’t go to Harvard Business School." He also said, "If you want to make fortunes and come back and donate large sums of money to Balliol you’re not going to do it if you get an MBA."

This is a link to Jim Rogers personal web page: www.jimrogers.com


1995: Investment Biker: Around the World with Jim Rogers.

2004: Hot Commodities: How Anyone Can Invest Profitably in the World's Best Market.

2007: A Bull in China: Investing Profitably in the World's Greatest Market.

2009: A Gift to My Children: A Father's Lessons For Life And Investing

2013: Street Smarts: Adventures on the Road and in the Markets


Below are a couple of interviews with Investment Guru - Jim Rogers

Note:  All of these articles were first posted on the Homepage.

VIDEO : The China Money Report - Jim Rogers: This Can’t Go on
- First 3min. of Video are in the Chinese Language, Jim Rogers and Interviewer speak in English Language at the 2:59 mark

The Economic Times - Gold will rally, but silver will do better: Jim Rogers

Capital Liberty News - Jim Rogers: Collapse of the Federal Reserve is ‘a probability’

ZeroHedge - Jim Rogers Blasts "Abolish The Fed" Before It Self-Destructs

AUDIO : ZeroHedge - Jim Rogers: "Own Gold" Because "One Day, Markets Will Stop Playing This Game"

VIDEO : RT - Jim Rogers: US is exceptional...it's largest debt nation in the world!

VIDEO : Fox Business - Rogers Holding Chairman Jim Rogers on gold, silver and why he is investing in sugar

Digital Journal - Jim Rogers: Gold to jump due to U.S. desperation to have a war

Bull Market Thinking - Jim Rogers: “This Is Too Insane–And I’m Afraid We’re All Going To Suffer For The Rest Of This Decade”

VIDEO (02:47) : The Daily Ticker - Jim Rogers on Gold: Continues to Have a Long Overdue Correction

Money Morning - Jim Rogers Exclusive: It's a "Race to Insanity"

Article & AUDIO : Bull Market Thinking - Jim Rogers: “This Is The First Time In Recorded History Where All Governments & Central Banks Are Printing Money”

Minyanville - Why Jim Rogers Is Hoarding Gold and Silver

Bull Market Thinking - Jim Rogers: “This is Not The 1920s, There’s No Reason For The Gov’t To Manipulate Gold Or Silver, I Don’t Buy It”

The Daily Bell - Jim Rogers on Politics, Money Metals and How to Deal With an Endless Downturn

VIDEO (14:44) : Jim Rogers Greece Should have never joined the Euro

Summary & AUDIO (05:44) : Bull Market Thinking - Jim Rogers: “What Kept Us Alive Was We Were Constantly Alert to the Fact That We Could Probably Get Killed”

VIDEO (04:44) : Jim Rogers The Next Economic Slowdown Is Going To Be Much Worse

VIDEO 02:33) : Business Insider - JIM ROGERS: The One Thing Investors Need To Consider Before Diving Into Commodities

AUDIO (24:29) : Financial Sense - Jim Rogers: Why You Want To Own Hard Assets In An Age Of Inflation

AUDIO (08:20) : Jim Rogers is the special guest on Goldseek radio

VIDEO (05:14) : Jim Rogers Speaks at the University of Alabama

MINING - Marc Faber, Jim Rogers not selling gold, but it’s not all good news for bullion

Commodity Online - Jim Rogers: Owning silver means you profit whether the economy tanks or not

Commodity Online - Jim Rogers: Eurozone deal for Greece not to save Europe

CNBC - US to Experience Stagflation Worse Than 1970s: Jim Rogers

and go back to the


For the Best Bullion Market News...