On July 9th, of 1985, the United States Congress passed the Liberty Coin Act, the law authorized the US Mint to start producing Gold and Silver American Eagle bullion coins.

The silver coins content, weight, and purity are all certified by the United States Mint.


Where You Can Buy
American Eagle Silver Bullion Coins 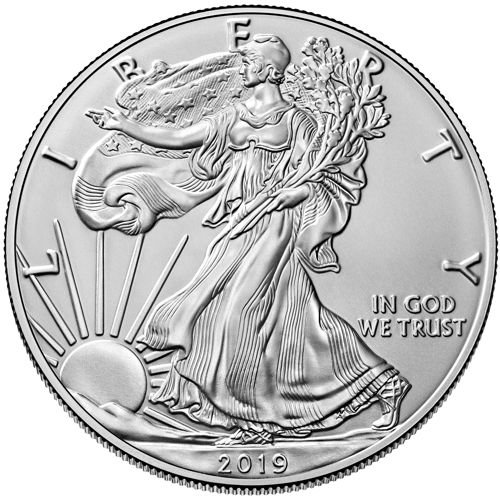 The obverse side of the American Eagle Silver bullion coin displays Adolph A. Weinman's design of the "Walking Liberty." 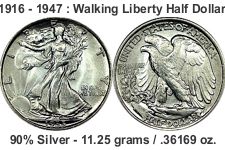 The design had originally been used in the United States "Walking Liberty" half a dollar silver coin, issued from 1916 to 1947.

The design depicts Lady Liberty walking in front of the rising sun.

She is cloaked in the American flag, with her right arm extended, and her left arm cradling branches of laurel and oak.

Adolph A. Weinman's initials can be found on the hem of Lady Liberty's gown.

Inscribed across the top of the 1oz Silver coin is the word "LIBERTY."

In addition, the words "IN GOD WE TRUST" the silver bullion coin's 'Year of Issue' are found on this side. 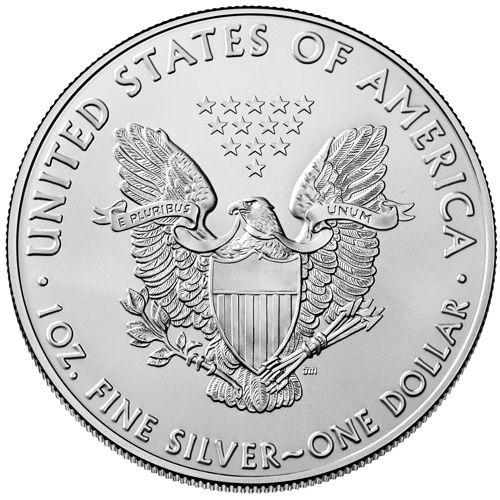 The reverse side of the silver bullion coin portrays an American Bald Eagle, behind an American shield.

The American eagle is grasping an olive branch with its right talon and arrows in its left talon, mimicking the Great Seal of the United States.

The banner that the eagle is holding in its beak says "E PLURIBUS UNUM," which is Latin for "Out of many, one."

Above the eagle, is Thirteen Five-pointed stars, representing the original Thirteen Colonies.

The words "UNITED STATES OF AMERICA" are inscribed across the top  of the coin.

The silver bullion coin's Weight "1 OZ.," and its Purity and Face Value "FINE SILVER~ONE DOLLAR" are inscribed along the bottom of the coin.

John Mercanti's initials are located directly under the eagle's talon that is holding the arrows.


1 oz. American Silver Eagle Photos Courtesy of : The US Mint.


Where & How
American Silver Eagle Bullion Coins
are Made


The West Point Mint in New York is the primary location for all bullion coin production.

However, it has been revealed that when the West Point Mint could not meet production demands that the US Mint also produced American Silver Eagle Bullion Coins at the Philadelphia and San Francisco Mints.

During years of high demand, the bulk of production at these two Mints usually happened at the end of the year.

In December and January of these years, the three facilities cooperated to ensure a sizeable inventory is available for purchase.

January is often one of the busiest months of the year for the sales of American Eagle Bullion Coins.

Below is a Video from the US Mint explaining the process of Minting the American Eagle Silver Bullion Coin.

The Blog posts below explain the process of getting the mintage numbers from different satellite mints between 1986 - 1997, seen above, through the FOIA requests to the U.S. Mint.

The following mintage figures were obtained by the US Mint through a FOIA (Freedom of Information Act) request.

See the separate pages of the US Mint's answer to this guide's FOIA request submitted by Steven Warrenfeltz, seen here: page-1, page-2, and page-3.

the US Bullion page