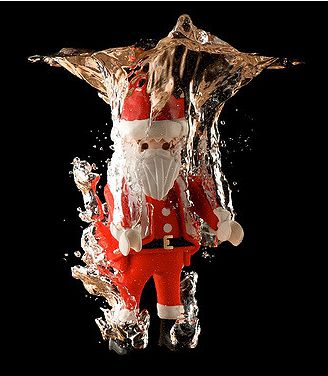 December Dips - it’s better to know in advance why a market dips.

In quick review; in Last Week’s Analysis of gold and silver (seen here), I questioned gold and silver's drop in price and thought it could have been an ‘anomaly.'

It wasn't, and things aren't looking better for the precious metals until after the New Year.

After being slapped with the new reality in Gold and Silver, I knew that I needed to change my thought process and start to think further ahead.

One of the best pieces of advice that my uncle, who Navigated and Piloted B-24's in WWII, gave me about life was “To Always Keep Your Eye on the Horizon.”

Ironically, the only way to see what’s on the horizon for the Precious Metals is to look into their past.

Gold and Silver have been in Bear markets since 2011, and although Gold's future is still up in the air for 2016, it has failed, repeatedly, to break its long-term falling trend-line. 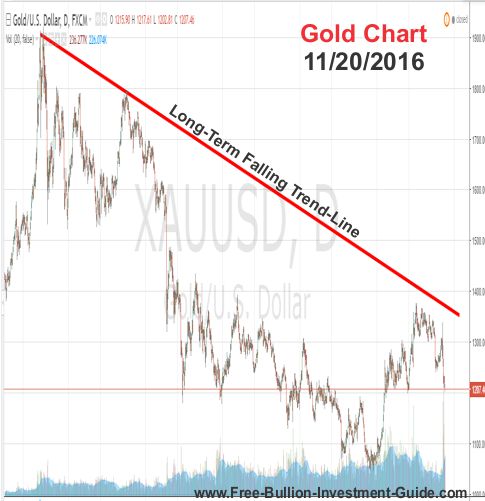 So, this week, I took a look at gold’s 5-year Bear Market chart to see what could be coming in December - 2016.

In the chart below you can see what I found.

Note: See close-ups under the 5-year chart with percentage changes for the each year's December dip. 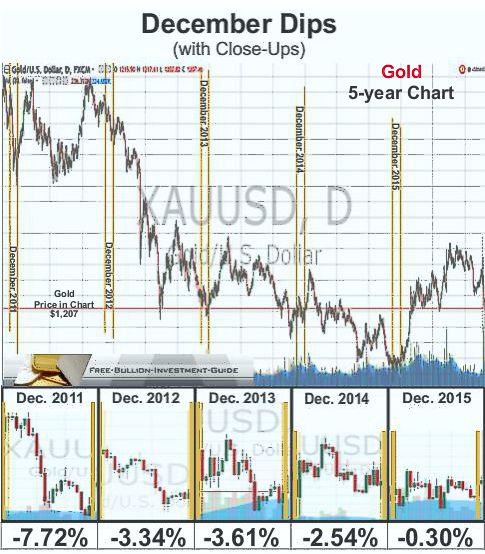 The chart above clearly shows that December has not been kind to Gold (or Silver) in their bear markets. (Silver leads gold in their trading movements)

After studying the chart above, I realized that I was only getting half of the results into why Gold has dipped every December for the last 5-years, and to get the other half of the story; I had to look at this Guide's Quarterly Reports.

In the 2011 - 4th quarter page, I didn’t give any reason for the drop, mostly because this was my first quarterly report page and I wasn’t quite sure how I wanted to set up the page, yet. 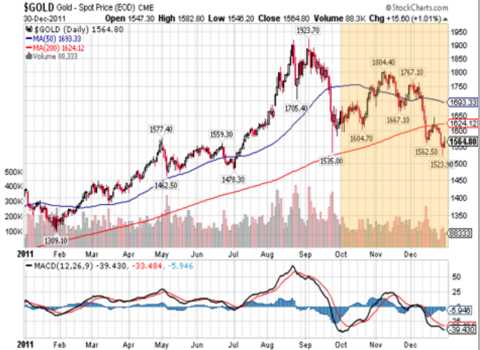 But, the articles that are posted under the charts reminded me of some of the reason why the price dropped so dramatically in 2011 for gold, which include:

In 2012, I gave greater reasons for the movement in the prior quarter, however, in my explanation I did give a hint for December 2012's Dip.

Below the chart is what I wrote for Gold on the 4th quarter page: 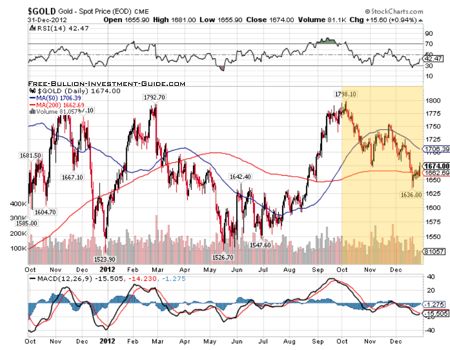 The Golden Cross late in the last quarter was a bullish signal.  However, there were other things going on in the world that was having an effect on Gold's price.

Two of those events were the U.S. Presidential Elections, and in the mainstream media, there was the constant talk about the dreaded "Fiscal Cliff."

These two current events at the time, left gold, silver, and platinum searching for a positive or negative direction, ultimately all three precious metals ended the year negatively.  Palladium, on the other hand, ended 2012 on a positive uptrend.

The hint in the description above for what was behind gold's fall was the "Fiscal Cliff."

I remember thinking at the time that the budget issues in Washington should give strength to Precious Metals, but it didn't this time.

The Bush Tax-Cuts were set to sunset at the end of the year which caused a great debate among the political parties, but the Obama Administration dug in his heels to let the tax cuts expire, so taxes were expected to rise.

However, in the articles below the charts (on the quarterly page), I found this video from Bloomberg that breaks down how and why gold moved the way it did for the full year of 2013.

VIDEO : Bloomberg - Too Many Bears in the Woods for Gold 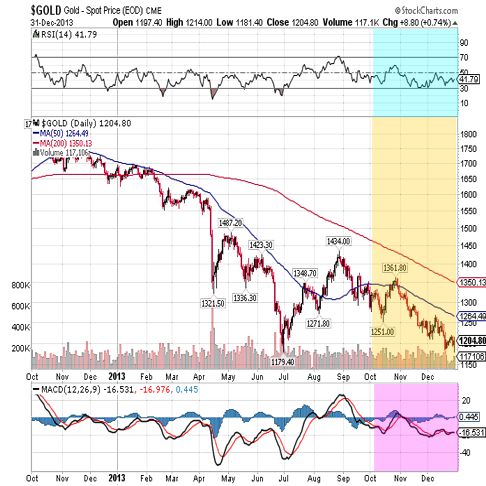 To understand why gold fell in the 4th quarter of 2014, I found my answers from the quarter's U.S. Dollar analysis:

During the 4th Quarter of 2014, the US Dollar Index has moved in the same direction as it did during the 3rd quarter of 2014; up.

There are several reasons why the US dollar has moved up since
late June and early July. 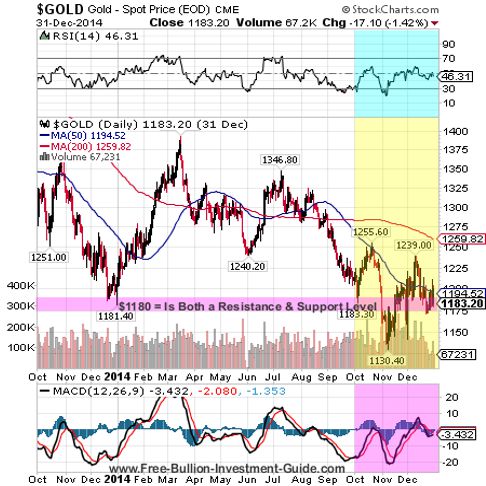 In 2015, this is the explanation I gave for gold’s price move in the 4th quarter report:

For the last two years, gold's price has been dictated by the Fed's
decision or lack thereof, to raise interest rates.

Since the Federal Reserve ended QE in October of 2014, Wall Street
has been expecting an Interest rate hike, but the Fed has failed to act.

The dovish talk from the Federal Reserve caused gold to rise in the
first few weeks of the quarter.

The price of gold rose so much that it briefly broke above the $1180 price resistance level.

But, shortly after the Fed failed to raise rates in October, the Fed
changed its tune and started to speak hawkishly for a rate hike in December.

In addition, the markets expected the ECB to increase its own form of QE at its December 3rd meeting. 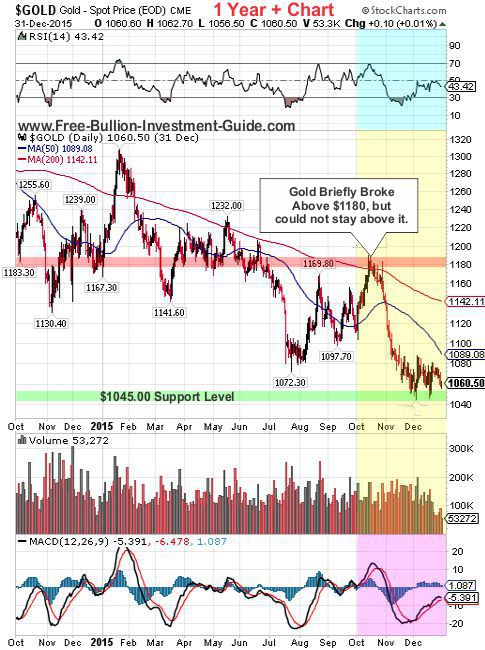 In conclusion, there are two other big factors that you need to know as to why gold’s bear market has seen its December dips.

1st: At the end of every year the market is thinly traded.  Most market traders are done with their work for the year, so they take off for Christmas and New Years and don't come back until after the first of the new year.

2nd: Gold Started each year from 2011-2015 at a higher price than it ended.  To reduce Capital Gain Tax burdens, Investor’s sell off losing assets at the end of the year (December).

As for the week ahead, I’ve decided not to post any charts this week for Gold, Silver and the U.S. Dollar; Before I offer more analysis on their movements, I'm going to let the dust settle after the strong moves.

Overall, I’m looking for moderate reversals in the price of Gold, Silver and the U.S. Dollar.

So until next week, I hope you have a Happy & Safe Thanksgiving!